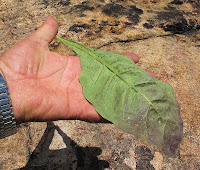 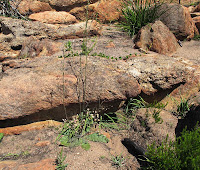 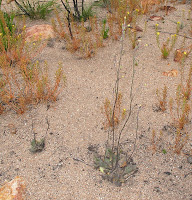 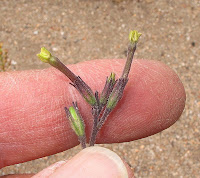 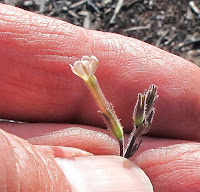 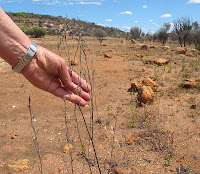 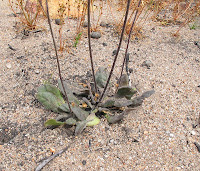 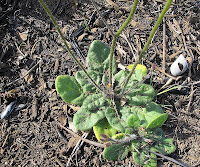 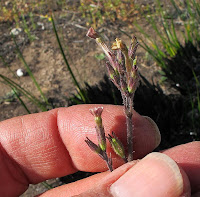 Nicotiana rotundifolia - Round-leaved Tobacco
This species is similar in casual appearance to most of the Australian tobacco plants used as chewing tobacco by Aborigines prior to European settlement, but were largely replaced by the stronger introduced smoking variety. From my experimentation, the leaves (after dusting off any sand) are placed in the mouth to form a wad, this is soft but firm and when bitten is easily dissected. However, whereas leafy vegetables quickly break down into small pieces for swallowing, the tobacco leaves do also but at a much slower rate.
The texture of the tobacco leaf in the mouth is quite interesting and I liken to washing your hair, which on the final rinse you get that squeaky-clean sensation, but with each chew of the tobacco a similar sensation is felt via the teeth. The wad can be chewed for a minute or two before the need to replace, but or me the nicotine effect was mild, although it would probably increase with additional wad replacements.
Nicotiana rotundifolia is endemic to WA and one of over 20 Australian species, it occurs from Perth to Kalbarri and east to Wiluna, before arching down to Mt Ragged, then west to the Bremer Bay region. However despite some near coastal recordings, this herb is largely an inland species, favouring granite outcrops or drainage zones in low rainfall areas.
In the Esperance mallee region the leaves of Nicotiana rotundifolia form a rosette at ground level, although I understand plants to the west also produce smaller leaves up the steam. The leaves vary considerably in shape and size depending on habitat and availability of moisture during the growing period, with those in sheltered zones capable of producing leaves to 25 cm (10”) in length, although usually they are much smaller.
The white or cream tubular flowers to 2 cm (3/4”) in length are formed at the tops of slender branching stems to 1 metre (3’) in length, although these are shorter in more exposed habitats. Flowering can occur at anytime of the year dependant upon sufficient warmth and rainfall.
Nicotiana rotundifolia is an annul or short lived perennial and after bushfire can form extensive colonies, but these will diminish after a few years to odd plants in favourable locations, however after another bushfire, plants will germinate afresh to return in strength.


The Nicotiana genus is part of the large and highly diverse Solanaceae family.

Posted by William Archer at 5:51 PM