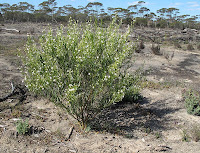 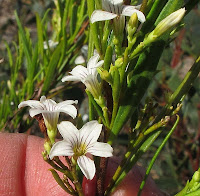 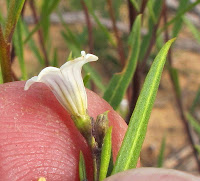 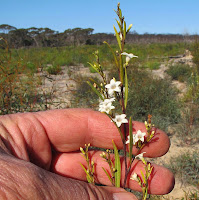 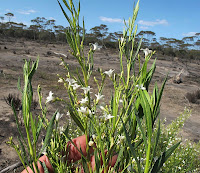 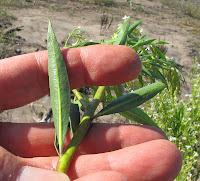 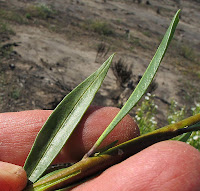 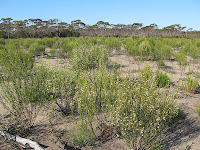 
This plant is also known as Emu Plant and Poison Bush and has been used for millennia for Aboriginal initiation and other scared ceremony. It is hallucinogenic and results in an altered state of consciousness that is used to embed insights, values and beliefs in young people to emphasise deep seated cultural values. It contains alkaloids such as nicotine and nornicotine, the former around 4 times stronger than ordinary tobacco, which unless prepared correctly can be lethal; the latter is an animal poison and currently used as an insecticide.

Duboisia hopwoodii is very common and widespread in WA (except for the SW of the State and North of Broome). It extends at similar latitude through the NT and into Far Western Qld, plus is also recorded through much of SA, Western NSW and the NW tip of Victoria. Surprisingly, it is not recorded for the Esperance region, yet here it is also very common and widespread, especially after fire in sandy loams over limestone.

Now before those keen to experience the benefits of this plant, it should be noted that not all Duboisia hopwoodii plants have the same chemical composition. The one with the hallucinogenic properties is only found in far NW Queensland (west of Boulia) and it was plants from this region that were traded by Aborigines over a wide area, presumably also for ceremonial use.

Plants found elsewhere have a much higher level of nornicotine that is an animal poison and not used for human consumption, which is probably why you don’t see truck loads of Duboisia hopwoodii being carted off to unknown destinations.

To return to the plant; it is an inland species growing to over three metres (10’) in height, but locally is seldom half that height, it has an upright habit with broad to narrow linear leaves. The numerous white to cream bell-shaped flowers (in bloom from June to November) are around 1 cm (3/8”) diameter and much the same in depth, with dark stripes running deeply into the tube, presumably to direct pollinating insects. The following small purple-black berries 3-6 mm (to ¼”) in diameter are also toxic.

Locally in mallee regions, especially areas with a limestone substrate (common to the NE and NW of Esperance), these plants can arise in substantial quantities after bushfire, where they grow quickly over a 3-4 year period before dying off and not seen again (except for odd ones in disturbed soil) until after the next bushfire. Elsewhere they also favour deep red or yellow sands in hollows, flats and low rises. Since European settlement Pituri has proved toxic to grazing animals like horses, goats, sheep and camels, although the degree of toxicity varies from place to place.

The genus Duboisia is part of the Solanaceae family, which also includes many food items like potatoes, tomatoes, capsicum, eggplant, etc., plus tobacco and the deadly nightshade, also various ornamental garden plants, so quite a mixed bag.

An interesting historical account of Duboisia hopwoodii is in an article produced by the University of Queensland and the Queensland Museum in their Queensland Historical Atlas, based on William Hodgkinson’s account of the 1876 ‘North West Exploration Party’ to the Mulligan River district.
http://www.qhatlas.com.au/content/duboisia-hopwoodii-colonial-curiosity