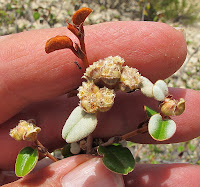 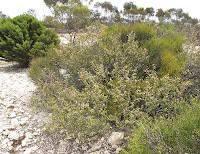 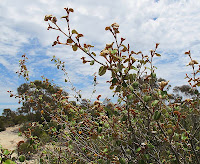 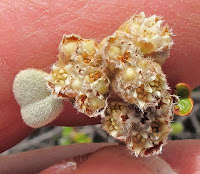 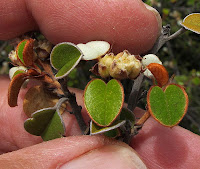 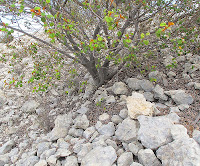 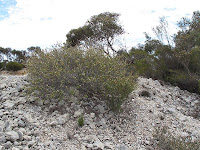 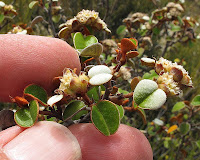 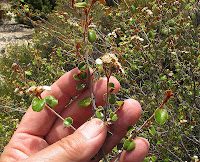 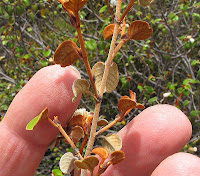 Spyridium tricolor
These plants are commonly referred to as 'Dusty Miller' especially in the Eastern States, although there are around 30 different species distributed from WA to NSW including SA, Victoria and Tasmania. Spyridium tricolor is only known from the SE of WA (NE of Esperance), extending into SA by a couple of collections near Ceduna. It is strongly associated with calcareous soils in mallee habitats, especially when over limestone.
The interesting feature with this species is the foliage, which initially is rusty brown below and white on top due to the dense hair coloration. The white hairs on top fall leaving a hairless pea-green upper surface, whereas the rusty ones below gradually change to white as they mature (see photos above).
Plants in the Spyridium genus are basically characterised by having compact heads of sessile or almost sessile flowers (stalkless), with small hooded petals that individually cover an anther. Spyridium means ‘small basket’ and refers to the heads of flowers snugly contained in the surrounding bracts.
The Spyridium tricolor plants above were around 1.2 metres (4’) in height, but they can grow to twice that size and may be found flowering at anytime of the year (other than periods of drought). I would imagine these flowers are pollinated by insects like flower beetles, which land on the floral heads then chomp their way through the tiny petals and hidden anthers thereby cross-pollinating at the same time.
The genus Spyridium is part of the Rhamnaceae family.
Main Reference: Spyridium tricolor (Rhamnaceae), a disjunct new species from the Great Australian Bight by W.R. Barker (SA Herbarium) and B.L. Rye (WA Herbarium).
Posted by William Archer at 12:53 PM