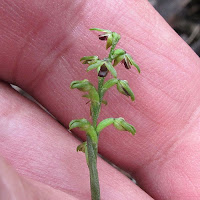 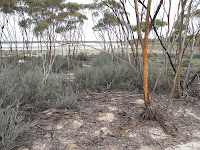 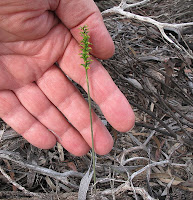 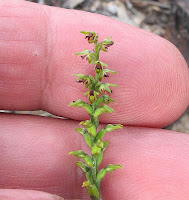 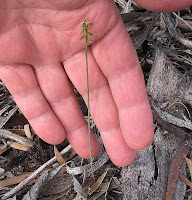 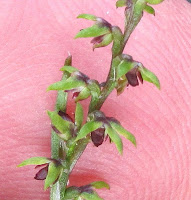 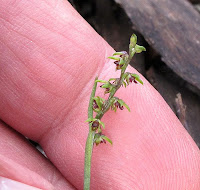 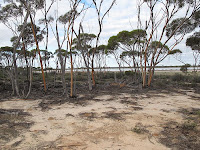 
This little orchid is rarely encountered, not because of its size (as it is easily seen in its rather sparse environment), but that there are few orchid enthusiasts wandering around in remote regions looking for them. The reason for this is there are very few orchids or any plants in bloom during April/May when this plant flowers, consequently very few people bother looking for them, preferring to spend their time more profitably by botanising during spring when orchids and other flowering plants are in abundance.

The distribution of Corunastylis tepperi in WA is from Corrigin to Eyre, then sparsely recorded through SA to finish in western Victoria, where surprisingly there are a number of records. It would appear that Alexander Beauglehole is responsible for most of these Victorian discoveries, as he was a Western District farmer who devoted much of his life to collecting plants throughout that State. He did this in order to plot their distribution in a 1 degree Latitude x 1.5 degrees Longitude grid system labelled A-Z, which remains in use today as a general guide, although with GPS and computer recordings of individual colonies, a more precise distribution system has developed.

There are around 50 Corunastylis species, but only Corunastylis tepperi is found in WA, with the highest number being in NSW and Victoria, although also found in Tasmania and Queensland, plus also recorded from New Zealand and New Caledonia. In the Esperance region it can sometimes be encountered around saltlakes, particularly under eucalypts, growing through the fallen bark and leaf-litter, so being a little green orchid against a dark brown background it is not difficult to spot, you just need to be there.

Originally many species of Corunastylis were placed in Prasophyllum, but these orchids were later transferred to Genoplesium and in 2002 to Corunastylis due to root and floral differences. However some authorities do not recognise the latter transfer, so these plants may still remain in Genoplesium although the species names remain the same.

Interestingly, in the rather open and often barren areas around saltlakes (see habitat photos above), Corunastylis tepperi releases a fruity perfume to attract small pollinating flies. But it is not alone in doing so, as many small white flowered heath species like Leucopogon are doing the same thing in neighbouring habitats, which combined would be a very powerful drawcard for local insects at this time of year.