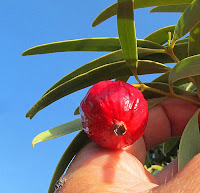 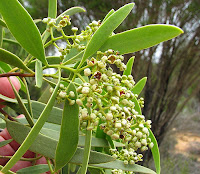 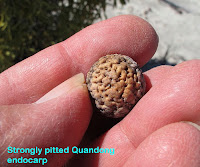 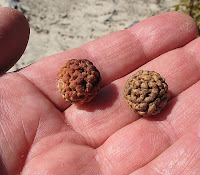 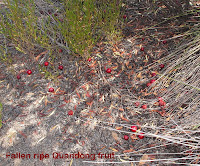 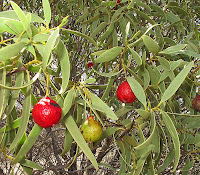 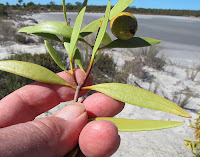 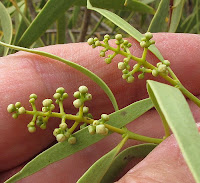 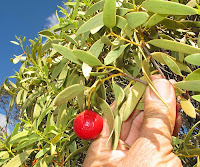 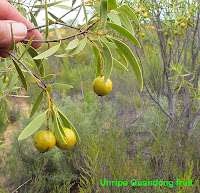 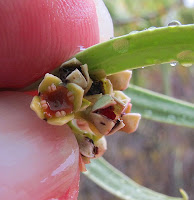 
This is an extremely widespread plant, occupying the lower 2/3 rd of Australia (excluding Tasmania and east of the Great Divide), consequently with such wide distribution it will vary tremendously throughout its range. As an example, although I knew this species well from WA where very common, when in the NSW outback some years ago, such were the differences I had to key it out from scratch in order to be sure of its identity.

The main confusion identifying the Quandong is with the leaves, which can be straight, curved, the leaf tips, acute or acuminate, fleshy or less so, olive green to mustard in colour, although always arranged in pairs (opposite) along the stems. It has a wide acceptance of habitat and soil type and will happily grow over limestone or granite, in sand, on rocky or gypsum soils, etc. But being a root parasite, soil type is not overly important, as it will take nutrients from its host that are adapted to the habitat, whatever that might be.

Santalum acuminatum can grow to 7 metres (24’), but is usually much shorter, growing as a shrub or bushy small tree, but in impoverished environments can be quite spindly. The bright red ripe fruit is a very distinctive feature, which is used to attract birds and animals like Emus that will eat them and so spread the seed far and wide via their droppings. Aborigines have consumed these tart fruits for eons and newcomers more recently in jams and preserves, something that is continued to this day with demand commonly outstripping supply.

The flowers are arranged in a panicle that is shorter than the leaves; each flower is small being only 3-4 mm (1/8”) diameter, which open wide for flying insects to pollinate. There are no petals, only four fleshy sepal-like segments, however the fruits grow to 2.5 cm (1”) in diameter and are initially green, but change to a bright red when ripe; they contain a large hard and strongly pitted endocarp (seed). The degree of roughness of this endocarp can assist identification of Australian species and old ones can usually be found under mature plants.

Around Esperance Santalum acuminatum is largely confined to mallee country where it can be common around low-lying granite outcrops and saltlakes, particularly where there is a limestone substrate. Consequently this species is rarely found within 50 or more kilometres (30 miles) from the coast.