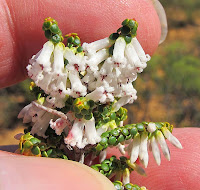 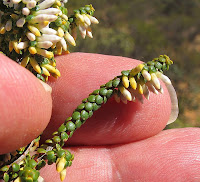 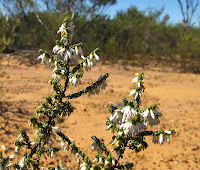 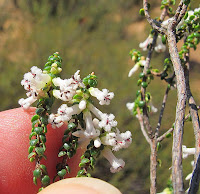 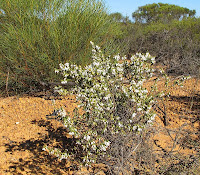 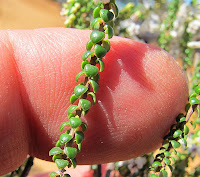 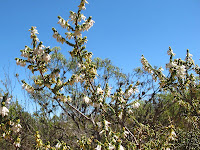 
Initially my eye was taken to the unusual leaf formation of this small shrub of inland mallee heath environments, as they bend backwards to form a reptilian scale-like covering to the upper stems. Not only that, but the tubular flowers are whiter than white and by their brightness, stand out from other species.

Only two very small colonies totalling less than 10 plants were encountered, one in a low-lying area and the other in a drainage channel, both in seasonally wet, although not waterlogged gravel soils. The shrubs were quite open in structure and growing to 60 cm (2’) in height, with dense clusters of pendant flowers near the ends of branches.

The neat orbicular leaves are glossy, thick and shallowly domed; the stiff petioles (leaf stalks) lean away from the limb but firmly hold the reflexed leaves arranged like bathroom tiles above the branch. They do not overlap, but the stem diameter is increased 2-3 times to no doubt create a cool, protected micro-environment beneath, thereby shading developing flowers and protecting them from scavenging insects.

Leucopogon dielsianus is rare in the Esperance region, mainly occurring to the far NW of the town, but is common further west to the Northam district (80 km or 50 miles ENE of Perth) and north as far as Southern Cross, 370 km or 230 miles NW of Esperance. Flowering is from March to September depending on local weather conditions.

This species is named after Ludwig Diels a German Botanist, who in 1900 and 1901 explored and collected many plant species with another German Botanist and friend Ernst Pritzel. They travelled extensively throughout southern WA including the Esperance region before returning to Germany 14 months later. From their collections they described 253 new species and since those times many plants have been named after them by later botanists appreciative of their work.

The genus Leucopogon belongs to the Ericaceae family, but may be also be listed under Epacridaceae.