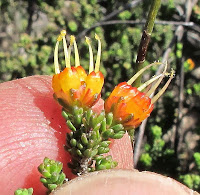 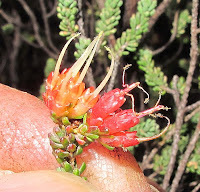 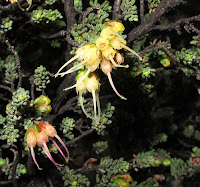 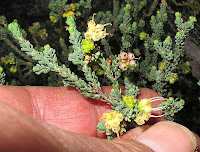 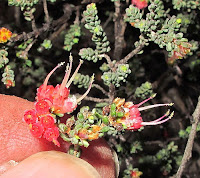 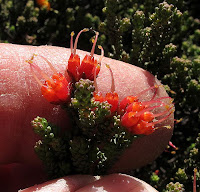 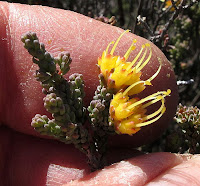 
This species is very similar to 2 other local Darwinia species that at times can be found growing quite close to each other, particularly to the north of Esperance between Scadden and Grass Patch (50-70 km or 30-45 miles north of Esperance), where small saltlakes abound. Of these three, the species most easily separated is Darwinia sp. Mt Burdett as detailed in my last post. It has larger flower clusters and leaves, but differs most obviously (as do all three) by the length of the petaloid bracts that surround the flower clusters and the bracteoles that surround each flower.

The petaloid bract and bracteole length of Darwinia sp. Gibson is the shortest and only around half the length of the calyx tube and well below the petals, thereby drawing greater attention to the exposed individual flowers. Conversely with Darwinia sp. Mt Burdett, these petaloid bracts are much longer and about the same length as the calyx and petals, with only the styles protruding.

The third similar species is Darwinia polycephala, where the petaloid bracts and bracteoles are about twice the length of Darwinia sp. Gibson and similar in length to the calyx, therefore with this species petals and styles are exposed. Both species grow around saltlakes, but whereas Darwinia sp. Gibson has a neat compact growth, D. polycephala has an open rambling habit.

Darwinia sp. Gibson is mainly found in the Scadden/Grass Patch region and can be quite common on sandy rises immediately around the normally dry lakes; it grows to 50 cm (20”) in height and spreads in excess of a metre (4’). The flower clusters have up to 7 flowers and are approximately 7 mm (little over ¼”) diameter, but make up for this size deficit by being bright cream, yellow, orange and scarlet, with colours darkening as flowers mature.

Flowering is recorded for June and July, but from my observations this can be extended to at least September and probably longer depending on local weather conditions. Darwinia sp. Gibson has a Priority One Conservation Code, which means taxa are known from less than 5 collections that are not on any kind of Flora Reserve and therefore considered at risk.

The Darwinia genus is part of the highly diverse Myrtaceae family.

Posted by William Archer at 3:40 PM