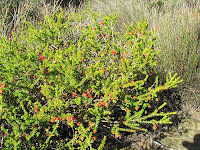 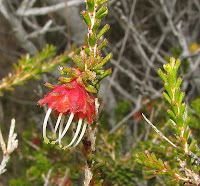 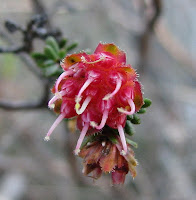 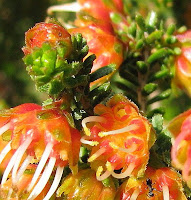 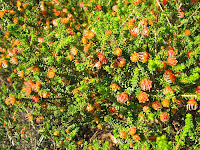 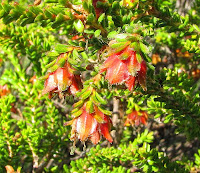 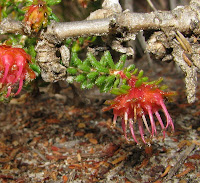 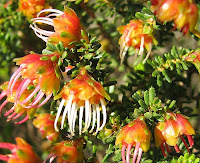 Darwinia sp. Mt Burdett
This is a very colourful shrub to around ½ metre (20”) in height, which flowers on and off for long periods depending on weather conditions and soil moisture. It has a Priority Four Conservation Code, which means it is rare, possibly threatened and in need of monitoring.
However this species is reasonably widespread to the North and NE of Esperance, favouring sandy loams over clay or gravel, generally in low-lying areas around saltlakes, drainage zones and roadsides. The flowers are in small clusters of a little over 1 cm (1/2”) diameter and are commonly pendant or partially so. The coloration varies from orange/red to red and darkening with age, also the white styles age to red. The plants usually flower from the latter part of winter, throughout spring and into early summer, plus will take advantage of good rainfall during other periods.
To the north of Esperance there is another very similar and probably closely related shrub called Darwinia sp. Gibson, which can be common around saltlakes in that area. The flower colour varies from cream, yellow, orange and red, to also darken as they mature. However, they are easily distinguished by the size and shape of the foliage, which are to 2 mm (1/16”) with sp. Gibson and more than 2 mm with sp. Burdett, plus the latter are also more prominently toothed.
With Darwinia sp. Mt Burdett the petaloid bracts that surround the flower clusters, are the same length or slightly longer than the inner flowers, whereas with sp. Gibson, they are much shorter and expose the inner flowers. I shall hopefully detail the Gibson sp. for comparison in my next post.
The Darwinia genus belongs to the extensive Myrtaceae family.