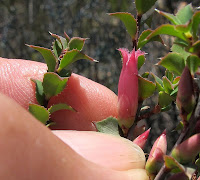 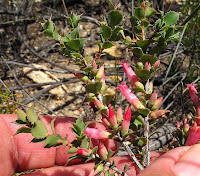 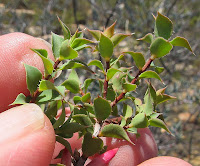 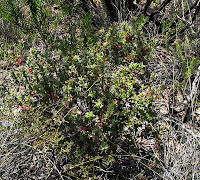 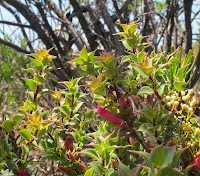 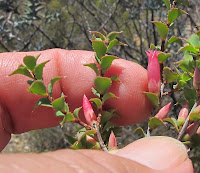 
Like most Australian plants in the Ericaceae family (may also be listed under Epacridaceae), Astroloma spp. produce small fleshy berries that are readily consumed by many animals especially birds, but some like Astroloma serratifolium are also eaten by people. This species produces a slightly tart green berry that is/was eaten raw by aborigines and used in jams, pies, etc., by early settlers. However due to the sharply serrated leaves, it was probably left for determined women and small children to collect.

Although rare around Esperance (the above photographed 50-60 km or 35 miles ENE of Ravensthorpe), it is widespread further west from a little north of Albany to Kalbarri, and east of Ravensthorpe to east of Kalbarri mainly on stony soils. Astroloma serratifolium can exceed a metre (4’) in height, but unless very old seldom exceeds half that height, although it may spread substantially.

The red/pink tubular flowers are around 1.5 cm (over 1/2”) in length and are probably pollinated by honeyeating birds. Like many heaths they can be long flowering and being largely an inland species will take advantage of any good passing storms, where in their favoured stony ground the rain can penetrate deeper and the moisture held longer. Due to this opportunistic flowering habit, plus occurring in several climate zones, Astroloma serratifolium is known to flower at any time of the year.