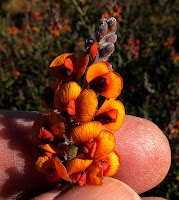 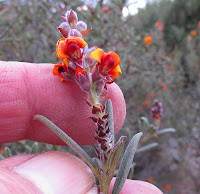 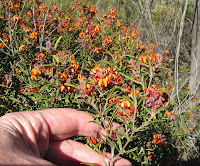 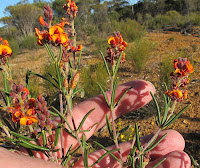 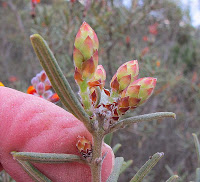 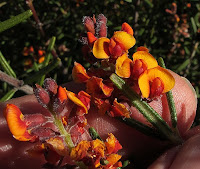 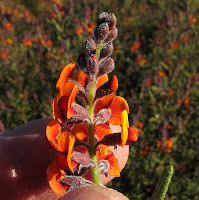 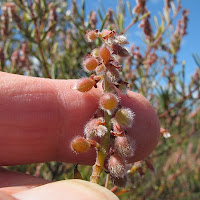 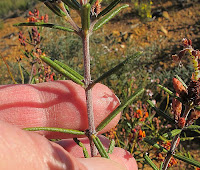 Gastrolobium nutans – Box Poison
This species is the fourth Box Poison detailed here, the other three being G. discolor, G. melanocarpum and G. musaceum, which collectively comprise by far the majority of plants with this general appearence in the Esperance region. But alas to the casual observer all look much alike, however the latter three can be distinguished from each other by the details supplied in their individual posts.
Gastrolobium nutans on the other hand is easily separated from these similar looking local Box Poisons (within 160 km or 100 miles of Esperance), by having the leaves in threes and two ovules (seed embryos) per flower ovary. The others above have their leaves in pairs, plus 4 or more ovules, however further west there are other species with similar features, so in that area other factors need to be taken into consideration.
Locally this more distinctive Box Poison is common in an inland triangle containing mallee shrubland and heath from NW of Esperance (Rollond Road) to Ravensthorpe, then north to Southern Cross, where it grows in scattered compact colonies on sandy soils, often over gravel or rocky ground. Like most pea-flowers these plants benefit from bushfires that assist seed germination and reduce other plant competition, therefore are frequently found at their best 2-5 years after a fire event in suitable habitat.
Gastrolobium nutans has an upright habit and is recorded growing to 1.5 metres (5’) in height, although is commonly half that size. The 15-30 terminal flowers are on a short rachis (spike) 1.5-4 cm (to 13/4”) in length, the base of which is clothed in overlapping deciduous brown bracts. The leaves are to 2.5 cm (1”) in length, strongly recurved and the lower surface densely hairy, but the upper surface glabrous (without hairs), although young leaves can also be hairy on top, but these are soon lost.
The compact orange, pink and red flowers tend to bloom together between August and October to produce eye-catching displays. But despite the attractive nature of these species, they are highly toxic (although safe to handle) and from which the poison 1080 is made, so no part thereof should be consumed.
The Gastrolobium genus is part of the exceptionally diverse Fabaceae family, but may be listed under Papilionaceae or Leguminosae elsewhere.
Reference:
Monograph of Gastrolobium (Fabaceae: Mirbelieae) by Chandler, Crisp, Cayzer and Bayer. Austral.Syst.Bot. 15:661 (2002).