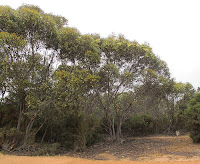 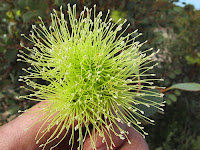 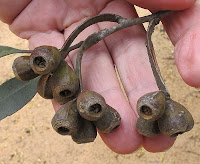 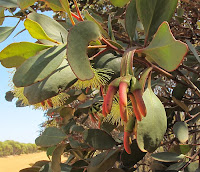 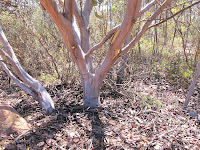 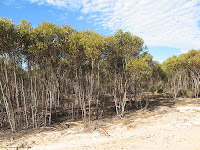 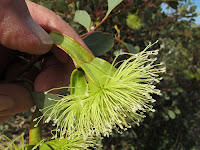 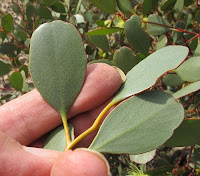 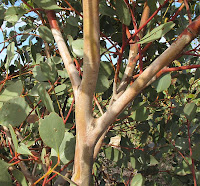 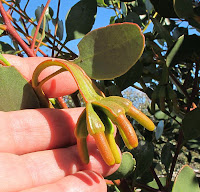 Eucalyptus platypus subsp. congregata - Moort
This handsome small tree growing to 8 metres (26’) can occur as an individual or more often in congested colonies (as the subspecies name of congregata suggests). It is described as a Marlock, which is a unique WA tree classification denoting that the eucalypt is without a lignotuber, has a slender trunk with dense foliage along its spreading branches. However, from the multi-trunk situation often observed, there seems to be some sort of underground branching mechanism, thereby (for what it is worth) commonly making it Mallee-like in the Esperance region.
This eucalypt is very common on the edge of the mallee country from the north of Esperance, spreading west to Jerramungup (100 km or 60 miles west of Ravensthorpe) in a band 80 km (50 miles) wide, and approximately 30 km (20 miles) from the coast. Here it is frequently found in a heavy loam over clay or gravel, and favouring lowlying or seasonally wet seepage areas.
The trunks are smooth and depending on the time of year, can be green/grey, silver/grey or copper/grey. The 7-flowered cluster is supported on a long pendant, strap-like peduncle and as they generally bloom at the same time, produce a highly ornamental floral display up to 10 cm (4”) across. The flowers bloom from January to March and are commonly greenish at first, but generally mature to yellow with a slight greenish tinge. They are bird as well as insect attracting, plus no doubt any other local nectar feeder.
The features that distinguish this species from any other are the pendant flowers on long peduncles and the thick elliptical leaves, which are around 2.5 cm (1”) in width. The other subspecies (subsp. platypus) has more oval leaves that are around 3.5 cm (13/8”) wide. The peduncles are also often shorter with subsp. platypus, but apparently not always. It partially overlaps with subsp. congregata from the Munglinup area (100 km or 60 miles west of Esperance) and further west to the extent of its distribution, whereas subsp. platypus extends further to the Katanning district north of Albany.
The Eucalyptus genus is one of the many genera within the large and diverse Myrtaceae family.

Posted by William Archer at 6:53 PM