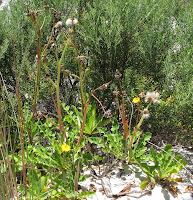 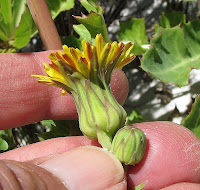 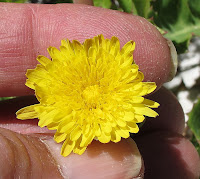 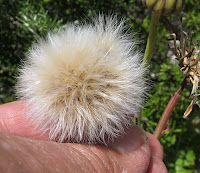 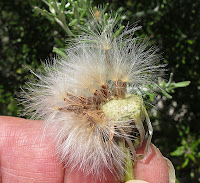 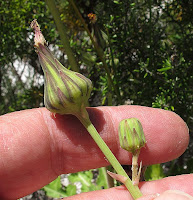 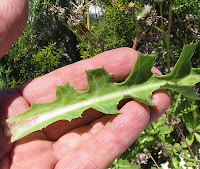 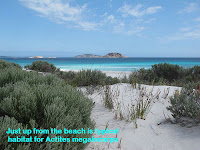 
When most people see plants like this, the first thing that crosses their mind is weed, but although many similar looking plants are introduced, the Dune Thistle is a native species having evolved in Australia. It is a perennial herbaceous species to around ½ metre (20”) in height and locally tends to grow on low sand dunes, just up from the beach.

Actites megalocarpus often grows in the shelter of larger shrubs where it spreads via a creeping rhizome, but can also be found in exposed situations that get salt-spray and sand-blasting winds with little adverse effect other than a more stunted growth. So a deceptively tough plant ideally suited to its chosen environment.

Previously, the Dune Thistle was placed in the Embergeria genus; therefore older records might list this plant erroneously as Embergeria megalocarpus. It is very similar to plants in the Sonchus genus or milkweeds as they are commonly known, which does have several introduced species, plus a native one (Sonchus hydrophilus). However the shape of their mature achenes (seeds) differ and are smaller than those of Actites megalocarpus, which are flattened and more than 4 mm (1/8”) in length and 2 mm in width. Achenes are important identification features especially with herbaceous daisies.

The Dune Thistle is endemic to Australia and found in coastal environments from Perth in WA to Bundaberg in Queensland, including Tasmania where common. In WA it is sparsely distributed as single plants or small-scattered colonies, this might be due to the drier conditions here as plants seem to appreciate deep seepage through low coastal dunes via creeks, or underlying granite/limestone.

The bright yellow flowers have only radiating ligulate florets and no contrasting central tubelar florets as most ornamental garden daisies, so tend to attract less interest, although in mild conditions they can bloom for most of the year and provide colour in frontline coastal environments. The leaves although robust, are flexible and despite the sharp looking points are not particularly prickly.

Like most similar looking daisies, they produce a characteristic milky sap, which is a defensive mechanism against grazing animals. The sap toxicity varies considerably between plant species and generally is not a major problem for humans, although skin and eye contact should be avoided, and definitely not consumed without expert advice.

Actites is a member of the large Asteraceae family, but depending on the classification system in use, it could also be listed under Compositae.