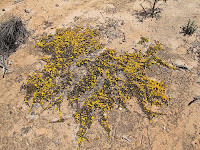 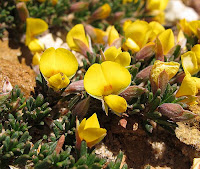 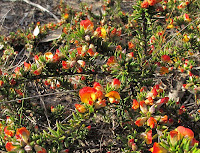 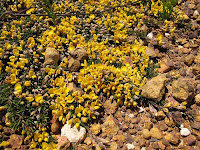 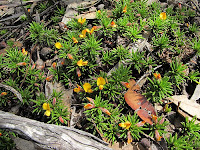 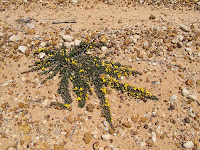 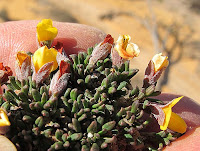 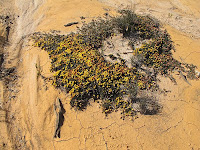 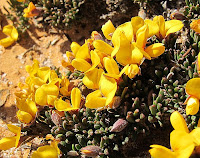 
This species is usually a prostrate plant to 2 metres (over 6’) diameter with bright yellow/gold blooms, but in some districts the flowers take on various combinations of red and yellow and may develop a semi-prostrate habit up to 15 cm (6”) off the ground. Pultenaea purpurea is widespread in mallee regions, favouring heavy loams over clay, gravel or limestone, especially in drainage zones. It is adaptable to full or partial sun, but is most common after bushfires when the area has been cleared of flora competition, thereby permitting plants in favourable locations to prosper for many years.

Pultenaea purpurea mainly occurs in a thick band 50-200 km (30-120 miles) from the coast, commencing from Ongerup (around 300 km or 190 miles west of Esperance) to north of Mt Ragged (150+km NE of Esperance). Due to its habitat preference of heavy loams and drainage zones in low rainfall areas, their distribution is scattered and largely localised to these not overly common locations.

This Pultenaea is distinguished from other Pultenaea spp. by their calyx (petal cover when in bud), which has five lobes, all of similar length, but two much broader than the other three. The spiral (sometimes obscurely so) arranged leaves are tightly recurved, with the length/width ratio being at, or slightly more than 4 to 1.

Flowering time locally is commonly from October to December, but this would depend on weather conditions especially if sufficient seasonal rain has fallen.

The Pultenaea genus is part of the Fabaceae family, although depending on the classification system being used, it may be listed under Papilionaceae.