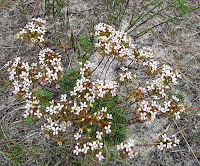 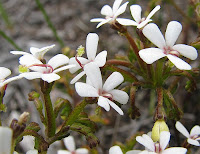 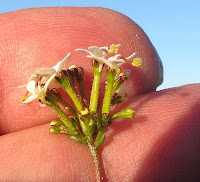 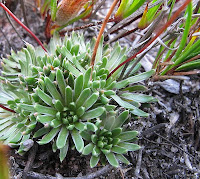 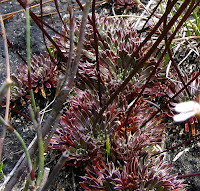 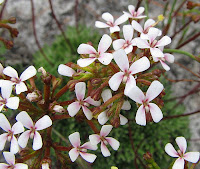 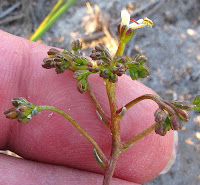 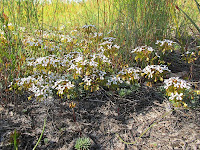 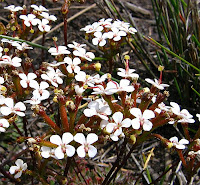 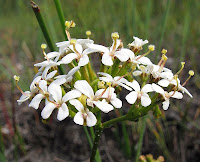 
This attractive Trigger-plant is very common in coastal and near coastal locations between Albany and 70 km (45 miles) east of Esperance. It is found in non-calcareous, moist sand/peat soils in low-lying areas (often winter-wet) like swamps and flood plains, or where there is seepage.

Stylidium corymbosum grows compact leafy rosettes to 4 cm (1.5”) diameter, which can develop off-shoots to form clumpy green cushions (red if ground still wet) around 15 cm (6”) or more in length and width. These clumps made of many individual rosettes, each produce flowering stems 10-12 cm (4”- 5”) in height, which carry many white flowers over several weeks.

There are two varieties of Stylidium corymbosum, the other is var. proliferum that only occurs around Albany, so locally cannot be confused with var. corymbosum. They differ by var. proliferum having broader petals and largely reproducing by producing more widely spaced and less compact off-shoots.

Locally A very similar species Stylidium piliferum, the Common Butterfly Trigger Plant can be easily confused, as it also grows in a heathland environment at the same time (October and November), plus is a more widespread species. However, they do not grow together as Stylidium piliferum prefers better drained soils, so will be found on higher ground, often surrounding the swamps and moist flats where Stylidium corymbosum occurs.

Besides the very different habitats, these similar looking species can be distinguished by the foliage, with S. piliferum having much longer hairs on the leaf tips, plus ragged transparent leaf edges (smooth on S. corymbosum leaves). The S. piliferum flowers are arranged in panicles (branched, uneven clusters), whist S. corymbosum as its name suggests are arranged in corymbs (flowers developing to a similar level, by the lower flower stalks growing longer than the upper ones).

The Stylidium genus belongs to the Stylidiaceae family.