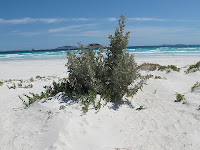 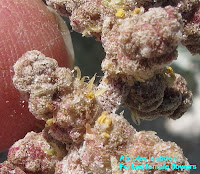 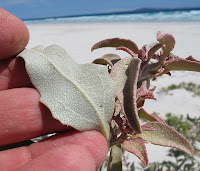 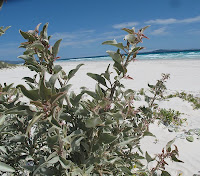 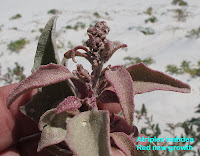 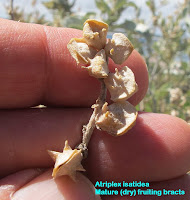 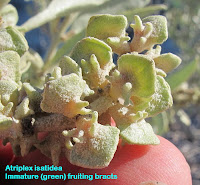 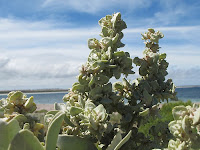 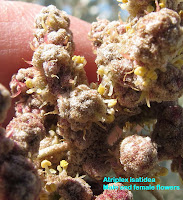 
As the common name suggests, this is a coastal (WA) species occurring in calcareous or non-calcareous white sandy soils between Karratha (over 1300 km or 810 miles north of Perth) and the Nullarbor (1000 km or 600 miles east of Perth), including many off-shore islands. So with such a wide distribution it can be regarded as a common species, but it tends to grow in scattered and sometimes widely spaced colonies, which from my observations are where there is deep seepage from a nearby river/creek, rocky outcrop, etc.

Atriplex isatidea commonly grows right on the beach at or near the high water mark and despite its fragile appearance can tolerate strong saline winds that sandblast the southcoast on a regular basis. The branches and leaves are protected from these harsh conditions by a thick scaly sheen, which without it, they would likely be torn to shreds. New growth is often pink or red and attractively speckled grey due to these scales.

The flowers are tiny and the separate male and female flowers are produced in a compact inflorescence, which when pollinated a pair of bracts grow around the fertilised female flower. The shape of these bracts differ between species and are the main means of Atriplex (Saltbush) species identification. This Coast Saltbush has bracts that are swollen in their center with pronounced wart-like appendages.

Atriplex isatidea could possibly be confused with Atriplex cinerea (Grey Saltbush), which not only occurs along the coast, but also around many inland saltlakes from north of Geraldton (WA) into SA, Vic, Tas. and NSW. However its bracts are usually smooth and without appendages, plus the leaves are generally much smaller.

Flowers and/or fruits of Atriplex isatidea, will somewhere within its wide distribution be available year round, although locally cold (winter) or dry (drought) conditions will slow this activity. Elsewhere the Coast Saltbush has been recorded growing to 2.5 metres in height, but around Esperance it seldom gets above 1.5 metres (5’).

The Atriplex genus belongs to the Chenopodiaceae family.