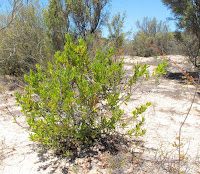 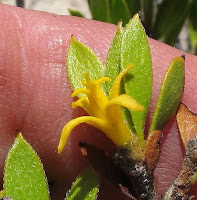 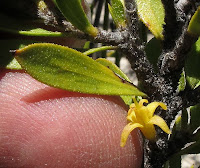 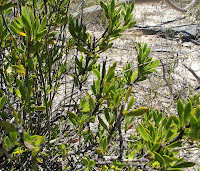 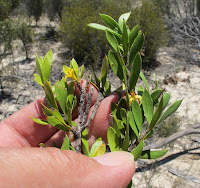 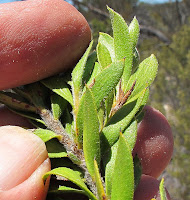 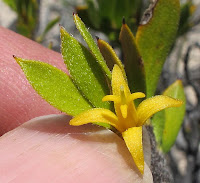 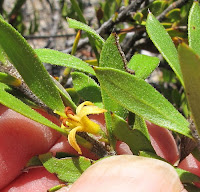 
This species has a rare Conservation Code rating of Priority Two, which basically means it is only known from a few locations, but is not thought to be in any immediate danger. It occurs NW of Mt. Ridley (north of Esperance), Cape Le Grand and Israelite Bay (east of Esperance) and had not been collected since Robert Brown’s Cape Le Grand collection in 1802 until 1979, when found at Israelite Bay by E.B. Barnsley. It has only been collected from two other localities since.

A very similar species Persoonia scabra whose distribution overlaps Persoonia spathulata is far more common, but is also poorly known with a rare Conservation Code rating of Priority Three, which means this species is known from a number of localities, but only in small numbers. The easiest way to distinguish the difference between these plants, is P. spathulata has both glandular and non-glandular hairs on leaves and flowers, whereas P. scabra has only non-glandular hairs that are soon deciduous thereby becoming glabrous (without hairs).

There are a number of other differences between these species, some detailed in my P. scabra post, with others difficult to describe in this format. Because of the subtle differences and combined with a small number of collections, these species have been lumped together and were only separated by Dr Peter Weston in his revision of the Western Australian Persoonia species in 1994 (Telopea 6 (1): 51-165), when better quality material became available.

There are two colonies of Persoonia spathulata that I am aware, both in the Crystal Lake region NW of Mt. Ridley, which consist of a number of individuals that make up defined colonies (P. scabra tends to occur as scattered individuals or in small groups). The P. spathulata colonies known to me are sited on the sides of large (not steep) sand-hills (P. scabra tends to grow on sandy flats); both species are confined to heath habitats.

Persoonia spathulata has a more upright growth habit than P. scabra and grows to around 60 cm (2’) in height; the young foliage is coarsely hairy and the hairs hatchet shaped with the handle held above, but parallel to the leaf surface. The deep yellow flowers are produced between December and January, but like many dry-land Persoonia spp. their occurrence can be very erratic.

The Persoonia genus is part of the impressively diverse Proteaceae family.