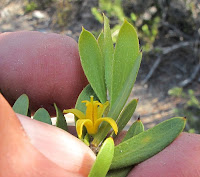 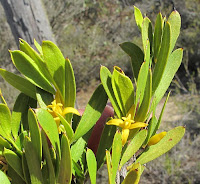 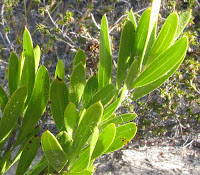 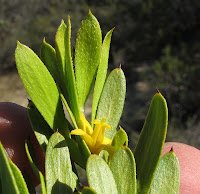 Persoonia scabra – Geebung
Plants in the genus Persoonia are collectively known as Geebungs, which is usually placed after the plant description, like scabra refers to the sandpaper-like texture of the leaves, so this species could rightfully be called Sandpaper-leaved Geebung. Although in WA, possibly due to their obscurity, very few have been given common names.
Persoonia scabra is quite widespread, from coastal areas to the inland mallee region, usually growing in a sandy  heathland environment, often overlying gravel, granite or limestone. Although I regularly encounter this shrub, there are rarely more than a handful of individuals, so it is not something to go looking for, as you are most unlikely to find it, but to keep it in mind if you happen to stumble upon one.
This species is usually no more than ½ metre (18”) in height, with an untidy spreading habit, it was confused for many years with Persoonia spathulata that overlaps in distribution, but is much less common and has a more upright habit. The leaves of both species are similar in size and touch, but with P. scabra the leaves are asymmetric and leaning, with P. spathulata they tend to be symmetrical and upright. It is the flowers however that differ most, with P. scabra having no, or few non-glandular hairs on the outside of the flower and a flower stalk (pedicel) with no hairs, whilst P. spathulata flowers are glandular hairy on the outside as are the pedicels.
Locating Persoonia scabra and several other species when in flower can be very frustrating, as some seem to miss a flowering season altogether, whilst others flower early, but their neighbours flower late. Generally they are slow growing plants, doing very little in the way of growth for several years, seemingly waiting for a bushfire or conditions to change before putting on a spurt of growth, or regrowth from the rootstock. Flowering, depending on seasonal weather conditions, which is another factor influencing the time they bloom, is usually from November to January.

Posted by William Archer at 2:52 PM