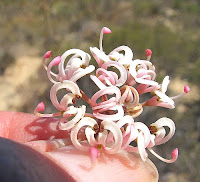 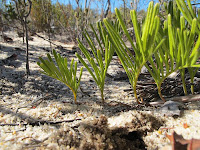 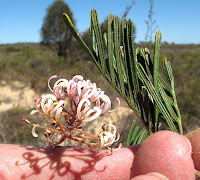 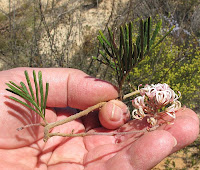 Grevillea prostrata - Pallarup Grevillea
Grevillea prostrata is a genuine prostrate shrub spreading to over a metre (4’) diameter, and not a form of a more upright species, however there is a difference and that being its pinnate like leaves are held stiffly upright. Although not flexible, they are unarmed and attractively spaced along a prostrate stem that may be completely buried by the sand. The delicate looking pink and white flowers form as rounded clusters and situated at the end of branches.
Most collections of this plant have been made in the Lake Grace region (north of Ravensthorpe), with odd outlaying collections in neighbouring districts including the Frank Hand National Park, which is around 40 km (25 miles) north of where I encountered mine. There is a Pallarup Lake between Lake Grace and Ravensthorpe, which is probably where this species was first discovered and where it gets the common name of the Pallarup Grevillea.
Grevillea prostrata currently has a Priority Four Conservation Code, which means it not currently in need of special protection, but is close to being Vulnerable. In the area south of Lake Tay this species is commonly encountered amongst low heath vegetation on gently sloping sandy hills (sometimes over gravel). Interestingly, the areas that had been burnt (3-5 years ago) had numbers of this species, but in nearby unburnt areas, none were seen. Most plants were juvenile with only a few leaves projecting from the sand that completely covered the stems, this leads me to think that fire kills them and regeneration is from seed.
In the area south of Lake Tay, these plants were common and widespread in habitat, so the species is certainly not rare, although restricted to suitable and often limited habitat. From the plants seen, growth habit was quite open, but I think it would become more branched and compact over time. The leaves stand around 7.5 cm (3”) in height and the flower clusters grow to 2.5 cm (1”) diameter. Flowering is recorded from August to January, but exact timing would very much depend on local weather conditions.
The Grevillea genus is part of the large and diverse Proteaceae family.
Posted by William Archer at 8:36 PM