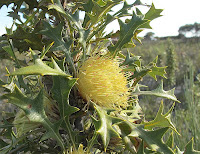 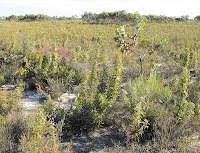 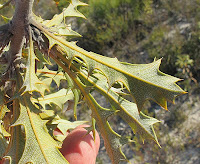 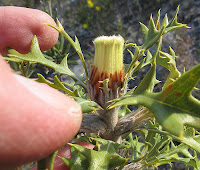 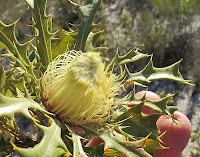 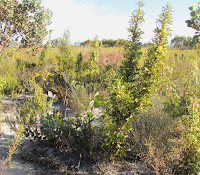 
This species (previously known as Dryandra pallida) only just gets into the Esperance region; the colony above contains many hundreds if not thousands of plants and is possibly the most easterly known. Its previous most easterly location was the Frank Hann National Park, which is around 50 km (30 miles) to the NW of this colony (south of Lake Tay). Banksia pallida is apparently common in the southern central wheatbelt from Nyabing (170 km or over 100 miles north of Albany) to the Frank Hann National Park (180 km or 110 miles NW of Esperance).

Banksia pallida is recorded growing to 2.5 metres, although south of Lake Tay they were currently less than a metre in height, having grown after a bushfire 3-4 years earlier. However they retain the columnar growth habit, but later branch near the base to produce a more bushy upright structure. The local soil type is a light sandy loam, probably over gravel. The leaves are held stiffly and being armed with sharp points, are quite prickly and difficult to handle without gloves.

The yellow flowers (to 2.5 cm or 1” diameter) are made up of several dozen small flowers that are densely hairy on the outside, whilst their hairless style is topped with a distinctive small red stigma (pollen presenter). Flowering is recorded from May to August, with the local colony having a good year by extending this into September.

The Banksia genus belongs to the large and highly ornamental Proteaceae family.

Posted by William Archer at 6:29 PM