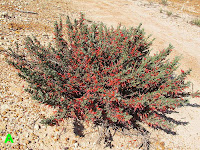 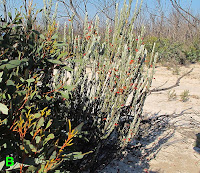 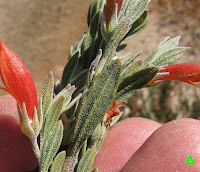 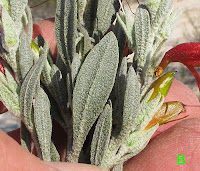 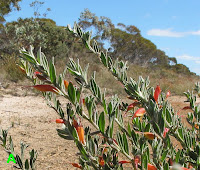 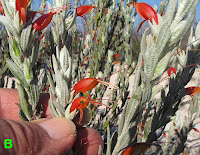 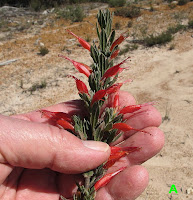 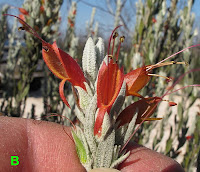 
Eremophila glabra subsp. albicans would be the most common subspecies of Eremophila glabra to be found in the Esperance region. However, there are many other prominent forms that are currently divided into 9 subspecies, 7 of which are endemic to Western Australia with subsp. glabra occurring Australia wide and subsp. murrayana endemic to the Murray district of SA, NSW and Victoria, plus there are many undescribed subspecies that await study.

I encountered one of these subspecies that I thought was E. glabra subsp. tomentosa, but on comparison with a more typical form of subsp. albicans, it appears to be more closely associated with it despite being thickly covered in matted hairs like subsp. tomentosa. The shape of the foliage and largely hidden calyx (under matted hairs) would however suggest this correction. Nevertheless, it does illustrate the variability of some widely distributed species.

The photographs with the letter A, are of the more typical E. glabra subsp. albicans, which is quite common off Cascades Road along a 10 kilometre (6 mile) stretch, SE of Cascades (almost 90 km or 55 miles NW of Esperance). Photos with the letter B are from a colony 140 km (85 miles) NE of Esperance. Both colonies were growing in a sandy loam over limestone.

Besides the hair cover difference of each group, colony A was a spreading shrub to 60 cm x 1.5 metre diameter (2’x 5’), whilst colony B was upright to 1.2 metres in height x 1 metre in width (4’x 3’). Interestingly upon further investigation, the average annual rainfall of colony B is half the amount colony A receives (20-30 cm or 8”-12” for B) to (40-50 cm for A); the average annual temperature is similar for both colonies. Therefore the covering of extra thick matted hair would aid the development of a microclimate, presumably to reduce moisture loss.

Eremophila glabra subsp. albicans is recorded from Carnarvon to Bunbury and from Albany to the Nullarbor, with colonies extending inland to the Kalgoorlie region, so very widespread and indicating there are probably other variations too. Eremophila glabra despite its many forms is also similar to another common, widespread and highly variable species Eremophila decipiens. However they are easily separated by the pedicel (flower stalk), with E. decipiens being at least twice as long as its longest sepal and curved into an S shape, whilst all forms of E. glabra have a straight pedicel much the same length as the largest sepal.

The flowers are bird-attracting and depending on local rainfall bloom anytime from May to November, although locally spring would be the main period.

Eremophila glabra is a member of the Scrophulariaceae family, but may still be listed under Myoporaceae elsewhere.