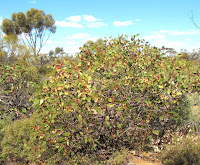 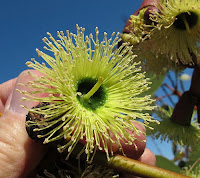 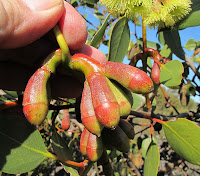 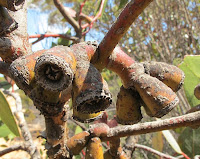 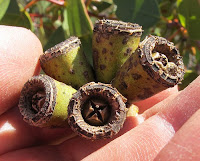 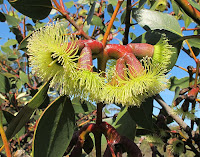 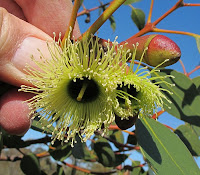 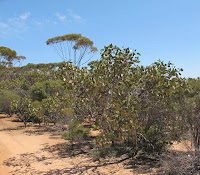 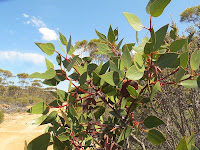 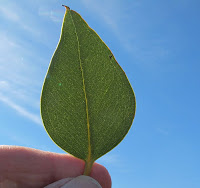 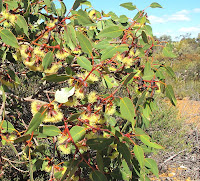 
Although this ornamental and interesting small mallee is recorded growing to 5 metres (16’) in height, it is mostly around half this size and would be a relatively slow growing species. Eucalyptus grossa has an open growth habit and looks more like an odd exotic shrub with large and very thick glossy leaves, made even more strange by its upside down yellow/green flowers that cater for both honeyeating birds and insects.

The Coarse-leaved Mallee is a common small eucalypt of the inland mallee region between the Hyden district (over 300 km or around 200 miles NW of Esperance) and Mt Ragged (150 km or around 100 miles NE of Esperance), plus as far north as the Norseman district (200 km or 125 miles North of Esperance). In this usually dry region with irregular rainfall and hot summers, it occupies a highly specific habitat in low lying areas with a heavy sand/clay loam overlying gravel or granite, especially the latter.

These heavy red loams that have usually been eroded from the granite are rock-hard during dry periods, but turn to a soft goo after soaking rain. I know this from bitter experience, when once I decided to visit a remote granite outcrop some years ago. I had then a good 4WD vehicle with a power take-off winch (which meant I could winch all day running directly from the engine and not the battery like most winches, which stop working once the battery runs flat).

I had driven from Esperance for a couple of hours and could just see the large granite outcrop, when I encountered a crossing with another track, requiring me to turn right. As I began the turn I could feel the wheels beginning to sink, so I straightened them and pushed the accelerator to the floor, but within 2-3 metres I had sunk to the rear axle and was going nowhere. Now having a winch is great, but you need something to attach it in order to pull yourself out and now with all my wire cable, winch straps and chains I was still about 3 metres (10’) short of a suitable tree.

When in the above situation, you have little option but to clear the sticky clay away with a spade, jack up the wheels and place whatever you can lay your hands on, under the wheels. So after you have done this you hop back into the vehicle and in 4WD, try to move forward as far as possible, but usually this is less than 30 cm (1’) and so you need to do it again and again until you can reach firm ground, or in this case close enough to hook onto the tree to use the winch.

After 2-3 hours I had made the distance, but with this kind of very hard work I was exhausted. Nevertheless, instead of trying to reach the outcrop via the direct route, I went straight ahead hoping to bypass the boggy corner, but alas the track finished only a couple of kilometres further on and so I was now forced to return the way I had come and cross about 30 metres (100’) of this boggy soil. So I ran at it as fast as I could go hoping my momentum would carry me over the softspot, but after 10 metres I quickly became bogged again, with another twenty metres to go. I was still very tired and there were no sizable trees to hook onto with the winch, plus it could be weeks before anyone would pass this way to get help.

The only vegetation within reach were less than 2 metre (6’) high Eucalyptus grossa and looking more like a small shrub, but with no better option available I decided to satisfy my mind and exclude this last remote possibility. I hooked up and began to winch and to my surprise and great relief, it was as solid as a rock and pulled me free in no time. Since then I praise this little eucalypt for its strength and deep root system, plus growing as a warning in places where you are more likely to get bogged.

The flowers of these tough little trees or multi-branched mallees open wide to around 5 cm (2”) diameter and flower mostly between August and November, but in its harsh environment local rainfall will determine exact timing. At other times the very thick glossy green leaves are quite eye-catching and add a great deal to its unique and exotic appearance.

The Eucalyptus genus belongs to the exceptionally large Myrtaceae family.

Posted by William Archer at 4:50 PM