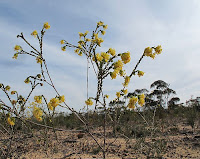 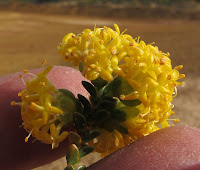 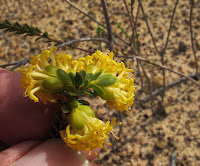 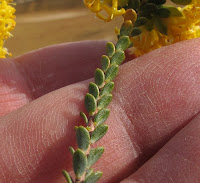 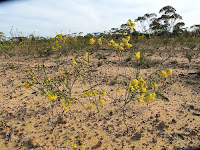 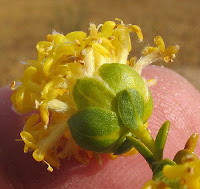 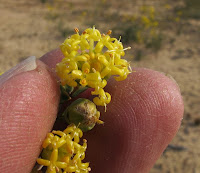 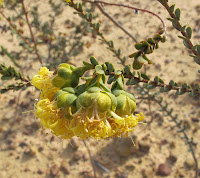 
This shrub species only just gets into the Esperance region, with the above probably the most easterly colony, being on the edge of a gravel quarry off Fields Road about 110 km (70 miles) NW of Esperance, where common but very localised. Here the habitat is a shallow sandy soil overlying gravel; it is an exposed location and would be very dry through the warmer months, which might explain the stunted and sparsely branched nature of this colony. Even the leaf and flower size is at the lower end of its taxonomic range, which I might add, varies considerably.

The normal distribution of Pimelea sulphurea is further west than the above, spreading to Albany, then NW to south of Geraldton, finally turning SE to the Southern Cross region, so occupies a range of climate zones. This distribution means a large variation in annual rainfall (30-80 cm or 12”-31.5”), which influences the size and appearance of the species, with leaf length ranging from 2-16 mm (less than 1/8” to 5/8”) and the flower length 6.5-17 mm long (1/4” to over 5/8”). However the yellow flowers of the local form are very intense, as commonly elsewhere it is often a cream color. The flowering period also varies being dependent on rainfall, but is usually between July and November.

Pimelea sulphurea tends to be very open and even spindly wherever it occurs, but locally with its smaller components, appears even more so. It grows to around 0.7 of a metre (28”), although plants in the above colony were less than ½ metre (20”) in height. In order to separate this highly variable species from others, the leaves and stem are without hairs. The flowers are pendant and hairy outside but glabrous (without hairs) inside. Importantly, it has 3 or more pairs of involucral bracts (leaf-like under flower clusters), which are largely glabrous on the outside, but mostly hairy inside, plus the innermost have ciliate (fine hairs) on the margins.

In Western Australia there are around 70 Pimelea species and subspecies, with over 100 Australia wide. They are also known as Rice-flowers or Banjines, with many ornamental species grown for the home garden. They belong to the Thymelaeaceae Family that is represented worldwide (especially Africa) and includes species like Daphne, Dais, Dirca (leatherwood) and others.