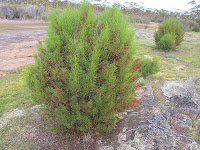 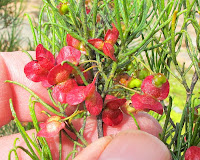 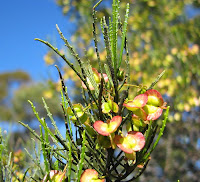 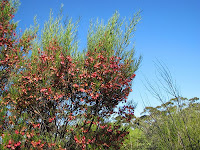 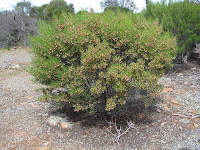 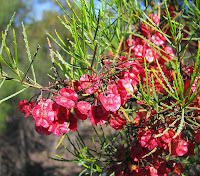 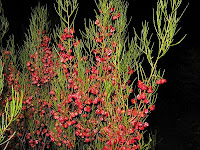 
There are around 70 Dodonaea or Hopbush species worldwide, with over 60 spread throughout Australia and of which 59 are endemic. They grow in a variety of habitats although many prefer the more arid regions, so are well adapted to hot/dry conditions. The family Sapindaceae contains a number of useful species including the Tulipwood, Lychee and the Tamarinds, with a number of colourful Hopbush species grown for ornamental purposes.

Dodonaea lobulata is an inland species, growing to 3 metres (10’) in height and in WA mainly found within a 400 km (250 mile) radius of Kalgoorlie, although is also indigenous to SA and NSW. Around Esperance it can be common, but is largely localised to red-loams around low-lying granite outcrops, plus with a limestone substrate shallowly overlying the outer granite perimeter.

Locally, the habitat type above is not uncommon in the mallee zone to the northeast of Esperance, which typically has a fine grey sand/clay soil over limestone. This dry mallee environment surrounds the low-lying granite outcrops and drains from the limestone onto them, instead of the elevated outcrops, where the drainage flows from the granite to surrounding areas. Dodonaea lobulata in these habitats is usually within 20 metres of the exposed granite. Elsewhere it tends to occur on heavy loams in rocky and/or limestone regions.

The leaves of Dodonaea lobulata are slightly viscid (sticky) and give off an aroma that is likened to cinnamon or mixed spice; the shrub itself is named after the small lobes attached along both sides of the leaves. The fruits or hops (named after the similarity to brewing hops), are initially coloured a pale green/yellow, but quickly take on a red flush that deepens to scarlet as the fruit matures. The flowers are very small and insignificant and play a lesser role to identification than the fruit and foliage.

As these plants usually grow in dry areas with highly irregular rainfall, they are very opportunistic to favourable flowering conditions after good rainfall, so timing can vary considerably with hops appearing anytime during winter and spring, although once they do, they are held ornamentally in full colour for a number of weeks.