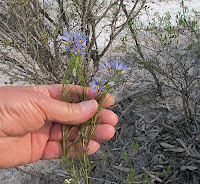 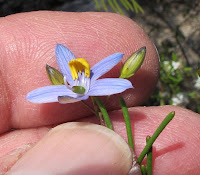 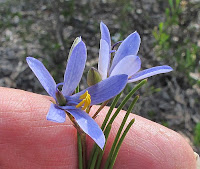 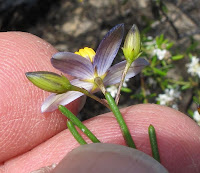 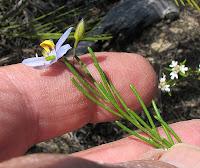 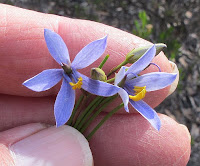 
The Cheiranthera genus belongs to the ornamental Pittosporaceae family that contains a number of colourful small shrubs, many with a climbing or twinning habit. There are 10 species in this genus (all endemic to Australia) that are spread from WA  to Queensland, only excluding the NT and Tasmania. In WA there are 5 species and all restricted to the State.

Cheiranthera is Greek for ‘hand flower’ referring to its use in bouquets, although the common name of ‘Finger-flower’ refers to the five prominent yellow anthers that are arranged to one side like the fingers of a hand. In WA Cheiranthera filifolia is mainly found inland from north of Geraldton to the Stirling Range (north of Albany), then east (past Esperance) to Israelite Bay, turning north to the Nullarbor region (east of Kalgoorlie). Locally it prefers the fine sand/clay loams over a heavier substrate, often along light drainage pathways in mallee areas.

This species is commonly a slender upright or lightly twinning shrub to 1 metre (3’), often with only 1-3 main stems leaning on neighbouring vegetation and sparsely branched in their upper half. It is the sort of plant you would not notice when not in flower as its leaves are also slender and nondescript, but when in flower they demand your attention, so another plant where you need to be in the right place at the right time.

There are two Cheiranthera spp. in the Esperance region, the other is C. brevifolia (once classified as a variety of C. filifolia) however locally it is seldom encountered, more commonly overlapping with C. filifolia further west. They are nevertheless easy to distinguish by the length of their leaves, with this species being considerably longer than 1 cm (3/8”) in length, whilst those of C. brevifolia are less than 1 cm in length.

The attractive blue (occasionally purple) and yellow C. filifolia flowers are around 2 cm (3/4”) diameter and bloom (depending on weather conditions) from August to December.