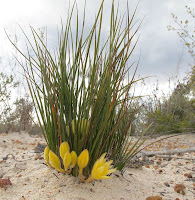 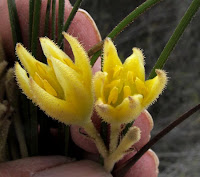 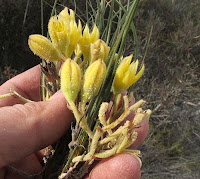 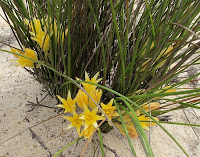 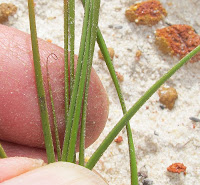 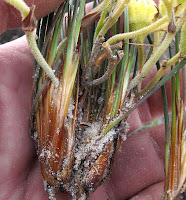 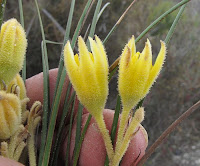 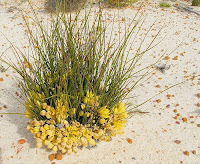 
Conostylis are in the same family (Haemodoraceae) as Kangaroo Paws and Bloodroots. They are generally low spreading or tufted perennial herbs with ornamental bright yellow to cream tubular flowers, pollinated by birds or insects. There are currently over 40 Conostylis species, all of which are endemic to the southwestern portion of Western Australia.

Conostylis lepidospermoides is a rare species (Declared Rare Flora = Endangered + Vulnerable) and is mostly located in small roadside colonies between Ravensthorpe and the Lake King region (65 km or 40 miles to the north). The plants above possibly represent a range extension being south of Lake Tay, 90 km (55 miles) east of Lake King and 130 km (80 miles) NW of Esperance, where 30 or more plants were growing together in a coarse sand, probably over gravel (laterite).

This species is readily distinguished from other Conostylis species by the long slender (sedge-like) leaves to around 30 cm (12”) in height, which have two rows (on each edge) of small dark bristles. The flowers (2 cm or ¾” in length) are covered on the outside by long hairs and are attached to a branched stem with up to 5 other flowers. Flowering is known to occur during September and October, making the plant very difficult to spot at other times due to its nondescript grass or sedge-like appearance.