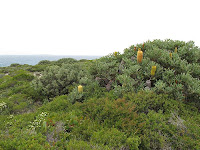 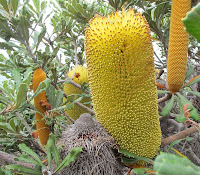 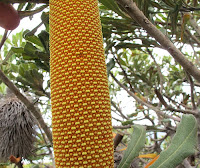 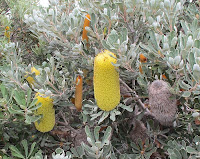 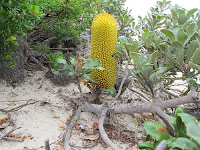 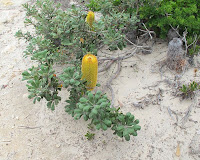 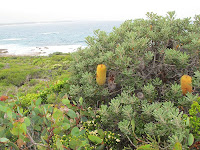 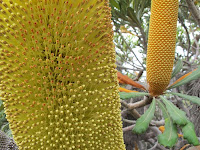 
Banksia media is a common and widespread Banksia located between Albany and the Nullarbor, plus inland to mallee regions. Such wide distribution will usually produce different forms based on habitat type, of which the coastal form is hereby compared to the inland variety. The inland form is usually a small tree 5-10 metres (30’) in height and commonly occurs in deep non-calcareous sandy soils, often with a clay or laterite substrate. The coastal form is rarely more than 2 metres (7’) in height and is mostly a bushy spreading shrub, preferring moderately calcareous sandy soil often over limestone.

In habitat, the (coastal) Banksia media usually grows within a kilometre (1/2 mile) of the coast and is often the tallest shrub in the windswept landscape; it is also very compact and spreading to 4 or more metres (over 12’), offering shelter to mammals, birds and more delicate vegetation. This low spreading habit is also retained when grown away from the coast in less windy conditions.

The large yellow flower spikes (15 cm or 6”) in height, also provide nectar to many animals from March to August, and even to December if weather conditions are favourable. The foliage of the coastal form is greyer than the inland form and although the flowers are similar in appearance, they are slightly smaller (20 cm or 8” for the inland form). In the Esperance region, some exposed near coastal plants develop a semi-prostrate form, but apparently in the Albany region there is another variety that is completely prostrate, although not seen locally.

The inland Banksia media form may be seen here.