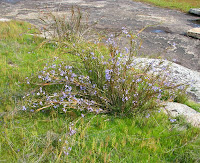 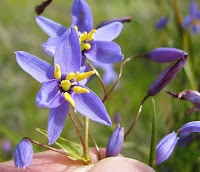 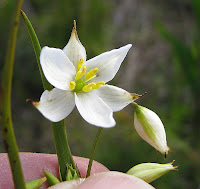 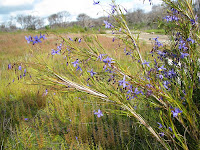 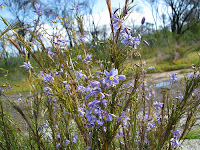 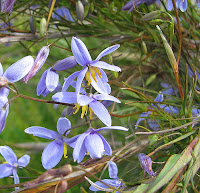 
Stypandra glauca is a highly variable species with many local forms in its widespread distribution across southern Australia, ranging from WA to Queensland and has even been found in New Caledonia. Some of these diverse forms have been described as different species, but have now been lumped into this one, although another is recognised, but is rare and confined to the Hyden WA district. It has a sprawling habit, smaller cream flowers, thinner stems and long slender leaves.

Besides having been given several species names, the genus Stypandra has also been moved around, having been placed in Liliaceae, Phormiaceae and now Hemerocallidaceae, although (depending on classification system in use) some authorities may still list them as belonging to those families.

Stypandra glauca is known by the common names of Nodding Blue-lily and Blind Grass, the latter because in southern WA, stock that have grazed it have gone blind, although this is not known from the Eastern States. This maybe due to certain WA colonies, where the number of chromosome pairs differ from those further east (S.D Hopper, Stypandra jamesii, Nuytsia Vol 13, 1999).

In the Esperance region, Stypandra glauca is usually less than a metre (3’) in height, but it has been recorded growing to twice that height. Throughout its range it grows in a number of habitats, although around Esperance rocky outcrops are much favoured, as are low-lying areas with sandy/peat or sand/clay soils, especially with light seepage. However these habitats are often very dry during the summer months, which illustrates the hardiness of these plants.

The drooping 2.5 cm (1”) diameter flowers, can bloom anytime between August to November (depending on local rainfall) and are mainly blue, but occasionally white flowering forms are encountered. The sheathing pale blue to green leaves are to 20 cm (8”) long, reducing in length along the stem. The roots are rhizomatous to produce a multi-stemmed tussock when mature. Stypandra glauca is regarded as a perennial herb, although larger specimens could also be considered a sub-shrub, as the base of the stems can be quite woody.