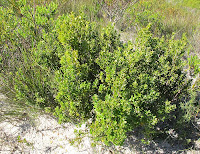 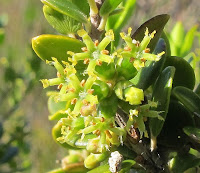 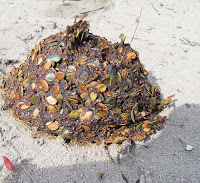 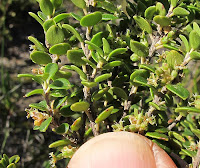 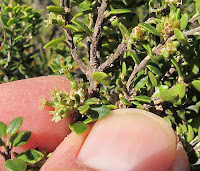 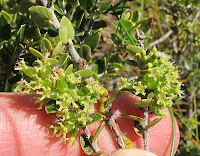 
The Coast Ground Berry from the Ericaceae family (syn. Epacridaceae) is a plant of calcareous sandy and limestone soils of coastal and near coastal areas of WA (south of Geraldton to the Nullarbor), right across SA to just over the Victorian boarder, plus Flinders and Prime Seal Islands off northern Tasmania. The small green flowers produce sweet berries that are relished by animals and birds, which spread the seed far and wide to make it a common species in calcareous habitats.

Pollination is thought by some, to be by small mammals and lizards, but I suspect just about anything crawling over the mature blooms (including ants) will do the job, which also includes the wind, consequently a large number of the fleshy fertile ovaries develop into plump spherical berries. Probably an additional aid to pollination is the tuft of hairs near the tip of every corolla lobe (petal-like), which can trap and hold pollen that is later dislodged by animals or the wind to be transported to waiting stigmas.

Regarding seed distribution, the most obvious and probably most effective would be the emu that is common in these near coastal environments. They are very partial to the sweet berries and will feed greedily on them and the clusters of nectar laden fleshy flowers; in the process they will also consume many leaves that are particularly noticeable in their droppings. Acrotriche cordata is recorded flowering in WA from July to December, plus an additional period when in berry, so as a food source (along with the berries and flowers of other Ericaceae shrubs like Leucopogon, etc.) they are an important and reliable resource for these large birds and their chicks.

Acrotriche cordata grows into a bushy shrub, which rarely exceeds 60 cm (2’) in height and two or threes times that in width. These shrubs are relatively slow growing, but generally live for a number of years, so tend to favour the slopes and tops of stable tertiary dunes as the vegetation in these areas is often low, thereby permitting this Ground Berry to grow without being smothered by larger and faster growing species.