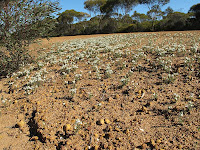 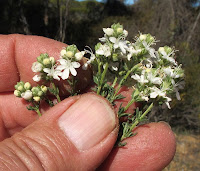 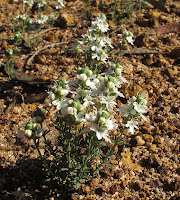 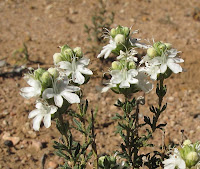 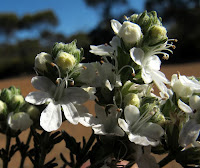 Teucrium sessiliflorum is a poorly collected species from the Lamiaceae family, despite occurring in WA, SA, NSW and Victoria. Even the State Herbaria seem confused about what is happening in States other than their own, as distribution records vary greatly. In NSW and Victoria the Camel Bush is known from only a few collections in mallee areas, but is more common further west. In WA it is mostly an inland mallee species ranging from the edge of the Nullarbor to Kalgoorlie, then West to Moora and SW to Ongerup. However generally it is also very poorly collected, especially within the Esperance region, but is found in small sparsely distributed (compact) colonies.

This species favours natural mallee clearings in low-lying areas, with either gravel or heavy sandy loams sometimes over limestone. As these soils are also favoured for agriculture, much of this habitat has already been cleared or colonised by smothering weeds in higher rainfall areas. The above was a compact colony growing on the edge of a gravel road (Fields Road, NW of Esperance), but was very localised.

The reason Teucrium sessiliflorum is often found in compact colonies is because it suckers from the root system, so colonies of many hundreds may only be from one or two plants with many spreading clones. In the event of fire, new growth can also develop from this spreading root complex and although not personally witnessed, I suspect during dry periods the above ground parts also die back to resprout again when conditions improve.

The persistent underground root-system is probably the reason this plant still exists, as it is readily consumed by various animals including goats, rabbits and camels, therefore fast regeneration when favourable growing conditions present in its dry and irregular rainfall environment, would be essential for survival. So although Teucrium sessiliflorum is classified as a perennial herb, it is probably more ephemeral in habit due to climate and grazing factors, which may also account for the limited number of collections.

Teucrium sessiliflorum is recorded growing to 30 cm (12”) in height, but is usually around half that size. There are other similar looking Teucrium spp., but T. sessiliflorum is readily identified by having 4 corolla (petal-like) lobes of near equal size, plus 1 larger lobe. Also the lobes are entire without further lobes, teeth or undulations. Flowering depending on local rainfall, can be anytime from August to December.