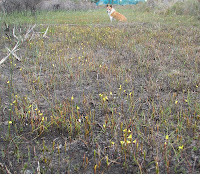 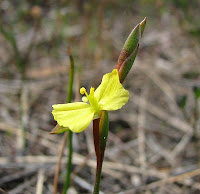 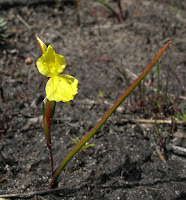 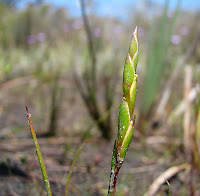 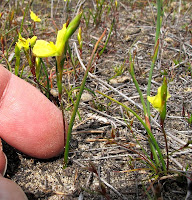 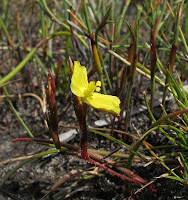 
The small but worldwide Philydraceae family houses the Philydrella genus, which was previously named Pritzelia. There are two Philydrella pygmaea subspecies, the other subsp. minima is a rare species restricted to the Augusta district, whereas this subsp. pygmaea occurs from Esperance to around 100 km (60 miles) east of the town, but is most common from Albany to Geraldton. Currently there is only one other Western Australia Philydrella species, P. drummondii (both WA endemics), which is found from Perth to west of Albany and has slightly larger flowers than P. pygmaea.

In the Esperance region, Philydrella pygmaea subsp. pygmaea can be very common, although localised to moist sandy loams on flood plains and around swamps or granite outcrops. As the plant is only about 10 cm (4”) in height, it can be easily smothered by larger vegetation, so it benefits from periodic bushfires or soil disturbance to stop larger species dominating the habitat.

These small herbaceous plants are ephemeral (like most terrestrial orchids) and only appear in the cool/wetter spring period, then die back to a tuberous (corm) rootstock when conditions become hotter and drier with the onset of summer. In an open habitat, these plants from August to November can form extensive and colourful colonies.

The flowers on casual observation have two large petals (actually tepals), hence the common name of Butterfly Flowers. However, there are also two much smaller ones either side of the single stamen (sometimes referred to as staminodes), plus a tiny sheathing pair that technically makes a total of 6 tepals, thereby enabling Philydrella to conform to the (sub-class) Monocotyledoneae classification.