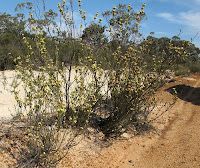 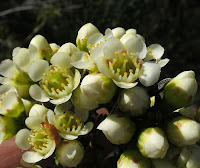 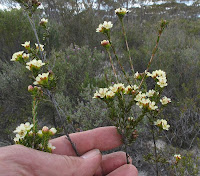 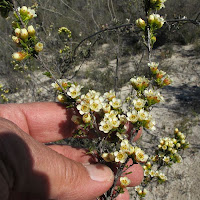 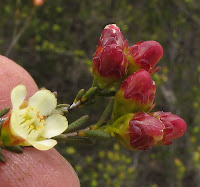 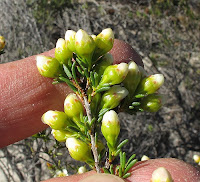 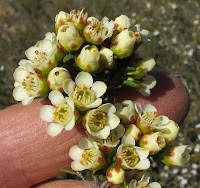 
The Chamelaucium genus is another highly ornamental group of shrubs from the Myrtaceae family, which are commonly called Waxflowers due to their long lasting waxy flowers. With many Chamelaucium plants the flowers are initially cream or white, but turn to pink and/or various shades of red as they age. However with this species, they tend to be only colourful when in bud, with the inner petal surface remaining cream or with only a coloured blush (at least until the end of October).

There are two recognised subspecies of Chamelaucium pauciflorum, although they are currently only in manuscript form and await publication. The other is subsp. thryptomenioides that occurs to the far northwest of Esperance and well outside the local area, whereas subsp. pauciflorum is found to the west and northwest (not as far as subsp. thryptomenioides), extending to the Albany region and north to the Southern Cross district. It is not recorded to the east of Esperance, although another similar looking species is to be found there.

Chamelaucium pauciflorum subsp. pauciflorum grows to around 1.5 metres (5'), tending to be erect with few branches, which unless the area has been burnt within the past few years. are often restricted to 1-3 vertical branches that hold small scattered clusters of flowers. To the NW of Esperance this species is reasonably common in small-scattered colonies, preferring sandy loams often over gravel, but going on the WA Herbarium distribution map is obviously poorly collected.

The flowers are recorded in bloom from August to October, although locally September to November would be more common.

Posted by William Archer at 4:53 PM