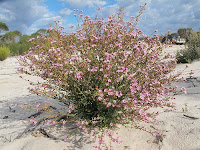 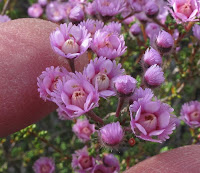 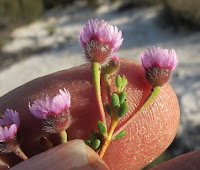 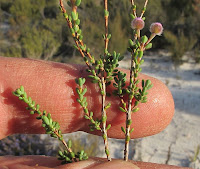 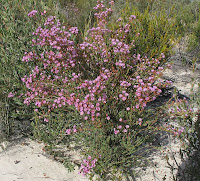 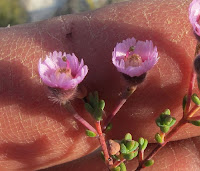 
There are several varieties of Verticordia plumosa, with three occurring in the Esperance region. This var. incrassata is found north of Esperance to the Norseman district, then NW to Southern Cross, then SW to near Albany. The var. grandiflora (see here) is more coastal and generally larger in all respects, plus flowers are mostly white. The other var. brachyphylla is very similar, but the foliage is more slender, plus apart from only a couple of local collections, are mostly located much further west from Albany to north of Perth.

Verticordia plumosa var. incrassata when compared to other Verticordia species is locally not particularly common and tends to be encountered in scattered small colonies. It grows to around 1/2 metre (20”) in height, with a more open floral arrangement than most species and grows on low-lying sandy rises over clay near saltlakes, or sand/rocky hillsides (possibly with light seepage or slow drainage).

Distinguishing features from other varieties include the leaves, which are to 1 mm (around 1/32”) in width; the peduncles (flower stalks) are between 4-8 mm (little over 1/8”-1/4”) in length; the sepals are 3-4 mm (little under 1/8”) long. Like most Verticordia spp. the pink flowers are produced over a long period, with this species recorded in bloom from July to November, although local weather conditions would influence exact timing.