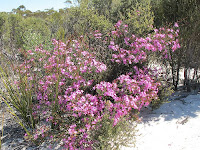 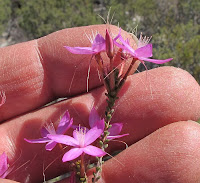 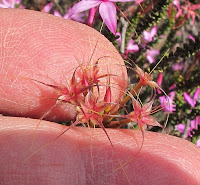 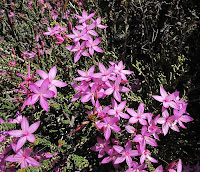 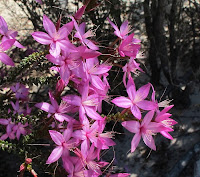 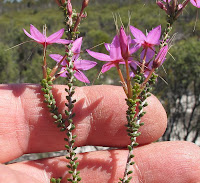 Calytrix is a genus in the large Myrtaceae family and are readily identifiable by the very long thin calyx lobes, which remain on the shrub for much longer than the petals and are quite ornamental in their own right. Calytrix duplistipulata is very similar to Calytrix decandra (see here), but has much shorter foliage and is found further inland on low sandy rises often near saltlakes, whereas C. decandra mainly occurs on the more elevated, non-calcareous, coastal or near coastal sandy soils (typically heath).

The Inland Pink Starflower can be encountered to the north of Esperance in the Mt Ridley region, then northwest to the Hyden district. Commonly growing to around a metre (3’) in height, they are usually seen in scattered, showy, compact colonies. These are often in natural clearings, after fire or where there has been soil disturbance. The bright pink flowers are around 2 cm (3/4”) diameter and can produce prolifically from March to November, but exact timing would be dependent on good rainfall and pleasantly warm conditions. August to October would be their more regular flowering period.