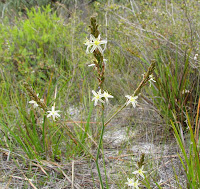 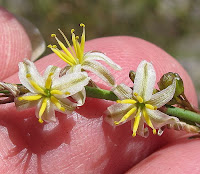 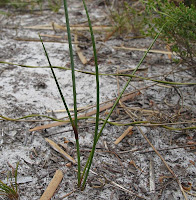 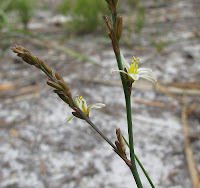 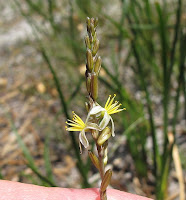 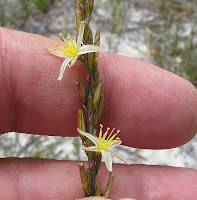 This species was previously lumped with Caesia parviflora, but that species is no longer recognised in Western Australia, but is regarded as indigenous to the Eastern States. Due to the WA Herbarium adopting a new classification system Caesia has been placed into the Hemerocallidaceae family, but may still be listed under Liliaceae or Anthericaceae in other institutions.

Caesia occidentalis occurs from near coastal Cape Arid (east of Esperance) to north of Perth, mainly in the higher rainfall SW zone. Around Esperance it favours low-lying non-calcareous sandy heath, particularly with a moist sub-soil; it appears in late Spring/early Summer when temperatures are on the increase and most herbs and annuals are dying back. The leaves and flowering stems are impressive by being quite robust and rigid, unlike what you would expect from a perennial herb that regrows from the roots each year.

Generally, Caesia occidentalis grows to around 60 cm (2’) in height, but can grow taller, with one or more flowering stems. These stems have a few widely spaced branches, each supporting closely packed clusters of off-white flowers with a green/grey stripe on the reverse. The banana yellow stamens are very prominent to add extra interest and color. Locally the Pale Grass Lily is well represented as scattered individuals or small groups in suitable habitat, but is never common.

Recorded in bloom from September to February, but locally November to January would be more usual, although summer rainfall can extend this period a little.