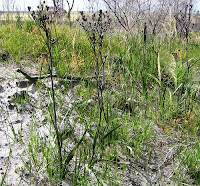 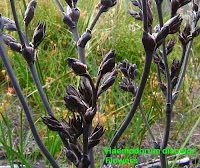 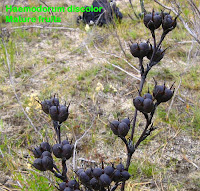 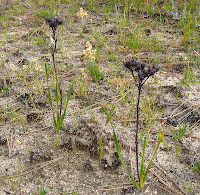 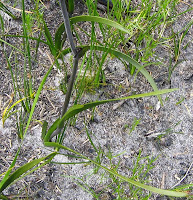 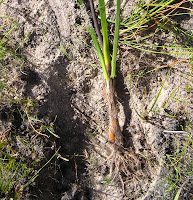 
Plants in the Haemodorum genus are related to Kangaroo Paws (Anigozanthos) in the Haemodoraceae family, but are much stranger. Like Kangaroo Paws they produce vertical flowering stems, but instead of brightly coloured tubular flowers, theirs are uniformly dark brown or black and unless you look closely are more like unopened buds. Haemodorum species also grow from a red or orange bulb, which are quite spicy and were used by aborigines as a food source.

In the Esperance region, there are 4 known species, of which this species and H. laxum are only known from a couple of collections. Both these species favour good sandy loams over gravel, which of course are the same as favoured by farming communities, so many colonies in this district have probably been cleared for that purpose. Other colonies may exist, but they are very difficult to find, as they mainly flower after bushfires, leaving only sedge-like leaves showing at other times. So to locate them, you must be in the right place at the right time, which could be a decade or more apart.

Haemodorum discolor is very similar to H. laxum, which although common elsewhere is locally only known from a single collection west of Esperance. To separate these species, the bracts of H. discolor are fleshy with broad white margins, whilst H. laxum are not fleshy and have narrow pale brown or grey margins.

The two common local Haemodorum species (H. brevisepalum and H. spicatum, details ) are unlikely to be confused with Haemodorum discolor, as they both have rounded leaves in cross section, whilst H. discolor has thick flat ones. The flowering stems to 1 metre (3’) are also branched to produce numerous loose clusters of flowers that bloom between September and November.

Currently the only known colony of this plant is at the base of a large granite outcrop east of Esperance. They are however quite common SW of a line between Kalbarri and Ravensthorpe, with odd records around Southern Cross.

Posted by William Archer at 4:34 PM