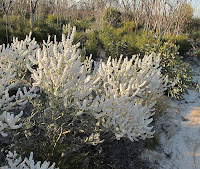 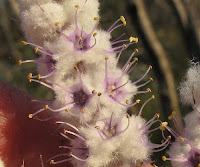 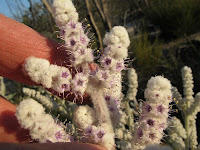 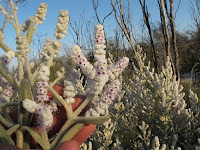 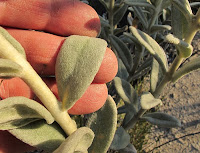 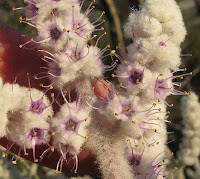 
The Lachnostachys genus is another attractive member of the Lamiaceae family, although it has also been placed in Verbenaceae and Chloanthaceae. There are six Lachnostachys species (all endemic to Western Australia), with this one having two varieties of which both are found in the Esperance region. Locally both varieties of Lachnostachys verbascifolia are restricted to sandy soils of the inland mallee region and although nowhere common, are often widespread in small compact colonies especially after bushfires.

Lachnostachys verbascifolia var. paniculata is known from the north and northeast of Esperance as far as the Russell Range (Mt. Ragged region), whereas var. verbascifolia occurs NW of Esperance and extends as far as Geraldton and Wiluna. Features that separate these plants are most obviously the leaves, which with this variety (var. paniculata) are longer and narrower (more lanceolate), plus the flower spikes tend to be more numerous in complex panicles. The leaves of var. verbascifolia are shorter and broader (ovate), plus the shrubs tend to be taller (to 1.5 metres or 5’) and more open.

The entire plant of var. paniculata is thickly covered in long, soft, branched hairs, which are light grey to white, giving a woolly appearance and making them stand out in the bush. The calyx (base of the petals) is totally obscured by the hairs, whilst the purple petals are connected to form an inverted cone, which on their outer rim the stamens are attached. The shrub commonly grows to 1.2 metres (4’) in height and is moderately bushy. Flowering is recorded from July to October.

Posted by William Archer at 5:20 PM