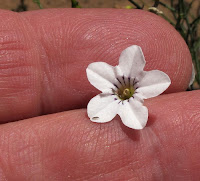 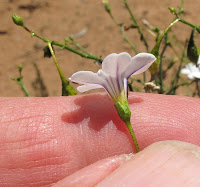 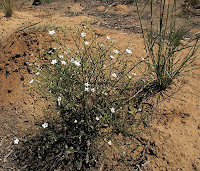 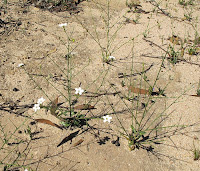 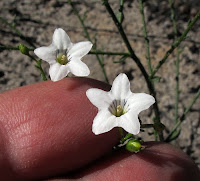 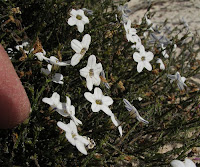 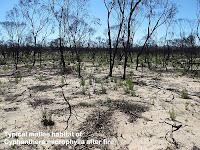 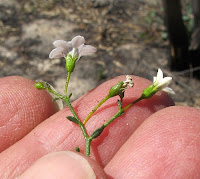 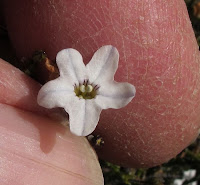 
Cyphanthera is a small genus in the large Solanaceae family, which contains many species with important food and narcotic properties that are highly valued by people worldwide. However, I am not aware of this small plant having any such noteworthy features, although it does contain alkaloids that may be of interest, but as yet are undiscovered. This species is mainly an inland species and endemic to Western Australia, occurring in sandy loams roughly within a triangle from Coorow, to Lake Grace and Mt Ragged.

Cyphanthera microphylla is quite common, particularly in sandy mallee country in a northerly arc from Esperance. It is a relatively short-lived species, being quickly crowded out and moisture deprived by other vegetation so is common immediately after fires, but dies out within a few years leaving only its seed in the soil to await the next bushfire. This shrub as the species name suggests has (apart from the first few leaves) small widely spaced ones on twiggy stems, generally giving it a very sparse open appearance. The odd ones that develop into bushy plants are usually those with little plant competition and an independent moisture supply, they are also assisted by tip pruning animals.

Seldom exceeding ½ metre (20”) in height, the foliage and stems are slightly viscid (sticky) and support a sprinkling of not unattractive purple striped white flowers. These are around 1.5 cm (5/8”) diameter and mostly bloom from August to November, but will take advantage of any good rainfall coupled with mild conditions to flower considerably longer.

Posted by William Archer at 6:14 PM