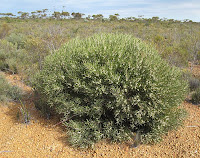 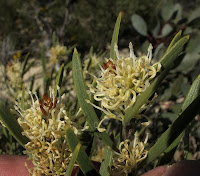 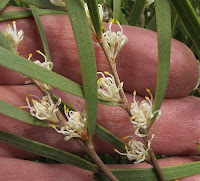 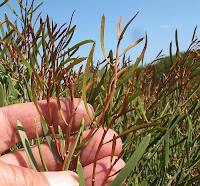 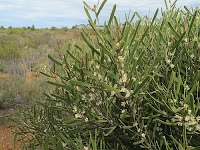 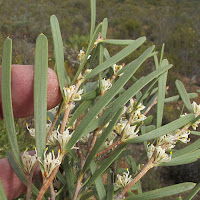 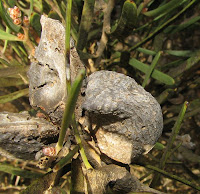 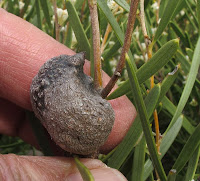 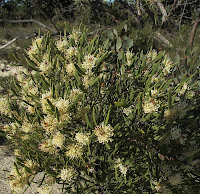 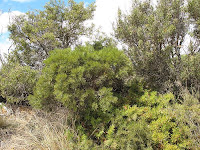 
The Esperance region is blessed with many Hakea spp. that can be found in just about every habitat. There are something like 30 species locally, so virtually anywhere you go, one or more will usually be nearby. They come in all shapes and sizes, some are prickly others not. Flower colour varies to include red, pink, white, yellow/orange and even blue, which are variously pollinated by insects, mammals or birds. Occurring from the coast to the inland mallee, they are found in a number of habitats with the Swan Fruit Hakea locally favouring gravel soils, sometimes with a sandy overlay in scattered colonies west and northwest of Esperance, plus an odd collection at Cape Arid (east of Esperance).

Hakea cygna subsp. cygna extends to the Stiling Range, then NW to the Geraldton region. There are two subspecies, the other and rarer subsp. needlei only grows south of Lake King, which is also west of Esperance but outside the area designated for this website. It differs by having terete or trigonous foliage to only 2 mm in width.

The Swan Fruit Hakea, Hakea cygna subsp. cygna is a bushy shrub with rust coloured new foliage and grows to around 2 metres (7’) in height. The leaves are held upright, are thick, rigid and slightly prickly with a prominent central nerve. The cream/white flowers develop in the leaf axils along the upper branches and tend to flower together, thereby producing a bright but short display for around 3-4 weeks. Flowering can occur anytime from May to October, but locally August and September are the most reliable.

The common name of Swan Fruit Hakea refers to the shape of the seed capsule (fruit), which some have likened to a swan or a ducks body. However to me it appears more like a cygnets head, but whatever you may think, the name seems to have been provided by a very imaginative person.