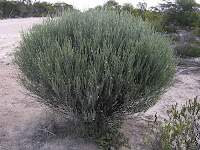 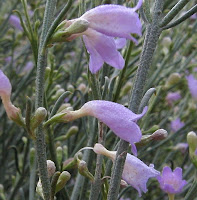 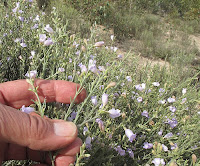 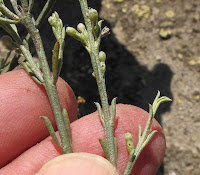 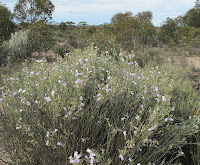 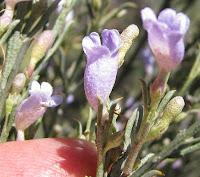 
This broom-like shrub is also known as the Silver Emu-bush or Scotia Bush and is found across southern Australia in WA, SA, NSW and Victoria, although with the latter two, only in their western portion. In WA it is found inland from Southern Cross to north of Kalgoorlie, then across the Nullarbor including some coastal areas. Around Esperance it is mainly encountered in mallee country to the North and NE of the town, where it favours shallow soils over limestone that often contain a high portion of powdered limestone.

Locally Eremophila scoparia grows to around 2 metres (6’-7’) in height, but can reach 3 metres elsewhere. The stems and foliage are covered in small silver/grey scales to give the plant an attractive silvery hue, which is enhanced by the leaves that are in pairs, each with a recurved point that face away from each other. The mauve/purple or lilac flowers can with some forms grow to 2.5 cm (1”) in length, but around Esperance are mostly half that size, although they can occur in considerable numbers.

As the shrub naturally grows in low rainfall areas with irregular rainfall, it has developed a strategy to produce flowers in response to out-of-season passing storms. In good seasons it can usually be found in bloom at anytime of the year, but late winter and during spring when temperatures are pleasantly warm and on average with reasonable rainfall, they are at their best.