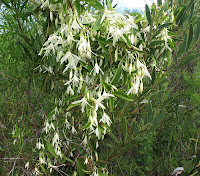 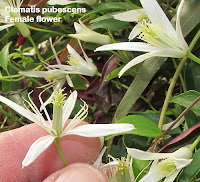 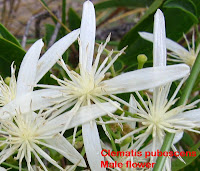 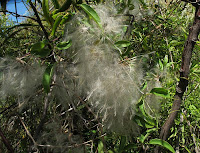 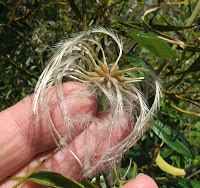 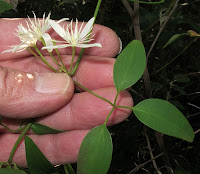 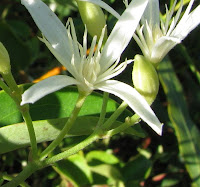 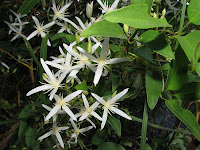 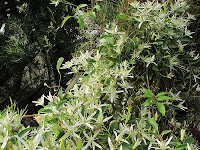 
The Clematis genus, a member of the Ranunculaceae family, has an extensive worldwide distribution with close to 300 species and because of their attractive appearance of large flowers and interesting fruits, are grown commercially in many countries. In Western Australia there are four species of which three are endemic including this one that is also called the Western Clematis. Clematis pubescens is very common and widespread from north of Perth, to and throughout the SW, then becoming more scattered further east to become only coastal and to eventually peter out on the Nullarbor.

Around Esperance it is often found in sandy calcareous soil in the stable tertiary dune area, especially in moist hollows where shrubs like Acacia saligna form extensive colonies and provide a support for this species to climb. This habitat is also popular with another Clematis (C. linearifolia), which often intertwines with C. pubescens to appear like the one plant. However, the foliage of the Common Clematis is much wider (greater than 1 cm or 3/8”, whereas C. linearifolia is less than 1 cm).

The flowering time between these species also differ, with Clematis pubescens being the first to flower and when finished C. linearifolia begins. Flowers are also larger to 5 cm (2”), whilst C. linearifolia is around 3.5 cm (11/2”) diameter. The species name of C. pubescens refers to a covering of hairs over the plant, which I might add are very small and can easily go unnoticed. However C. linearifolia also has hairs, particularly on young foliage, so this feature can be confusing regarding identification.

A more reliable distinction between the two are the anthers, which with C. pubescens have a small appendage on the tip, but C. linearifolia has none. With both species some plants are entirely male, whilst others are entirely female. The male flowers are always the first to flower and greatly outnumber the female plants. Once pollinated, the hairy achenes (seeds) produce an ornamental silver plumose awn to around 6 cm (21/2”) in length. Locally, flowers are produced from May to early August, although elsewhere with cooler weather conditions, they have been recorded blooming as late as November, although I suspect this is very unusual.

Posted by William Archer at 8:18 PM