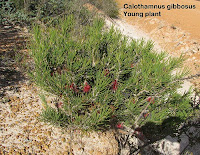 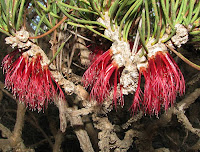 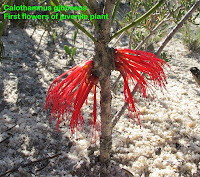 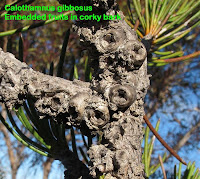 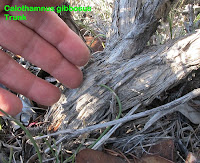 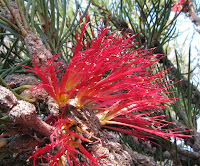 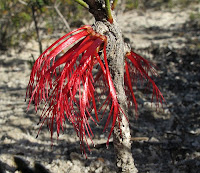 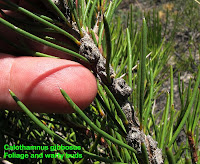 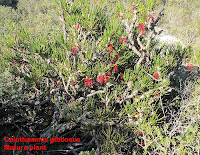 
Shrubs in the Calothamnus genus are commonly known as One-sided Bottlebrushes or Net-bushes and belong to the exceptionally large and diverse Myrtaceae family. Calothamnus gibbosus occurs NW of Esperance (mostly west of Lort River, 65 km or 40 miles away) to the Stirling Range (NE of Albany), growing on sandy clay loams, sometimes over gravel and generally 10-60 km (6-40 miles) from the coast. This favoured location often places this plant in conflict with farming land, resulting in many colonies restricted to roadside reserves. However it is still reasonably common and can be found in sizeable compact colonies, although these tend to be localised.

Calothamnus gibbosus has been confused with Calothamnus gracilis, which is a very common and widespread species often overlapping with C. gibbosus, although they are rarely found growing together. The general appearance of young plants is very similar, but as they mature the leaves of C. gibbosus become noticeably shorter and thicker, plus more prickly. However it is the stems that differ the most, with this species producing swollen growths along the stems that eventually produce the red flowers, of which the calyx (cup at flower base, but not the petals) are total immersed. The calyx of Calothamnus gracilis is at most only partially immersed.

The fruits remain partially buried in the corky stems and are without ornamentation, whereas C. gracilis are usually ribbed or have nodule ornamentation. The stems of mature plants become more of a feature as they produce a thick corky structure, whereas Calothamnus gracilis as its name suggests has a more slender/graceful appearance. Calothamnus gibbosus tends to grow with heath species, under small mallee eucalypts where recorded growing to 1.5 metres (5’), but are mostly less than 1 metre (3’) in height. The bird attracting flowers are produced between May and November, with the exact timing determined by local weather conditions.

Posted by William Archer at 7:52 PM