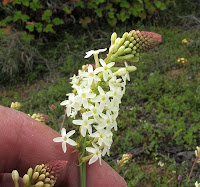 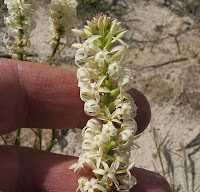 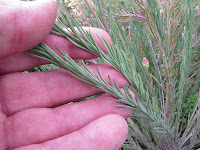 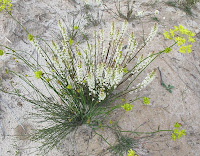 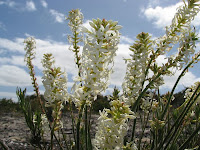 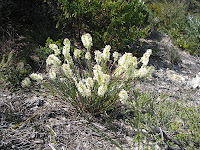 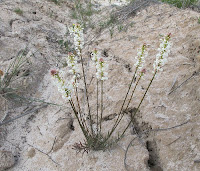 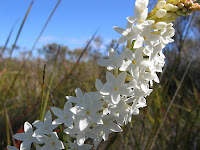 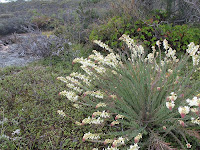 
Plants belonging to the Stackhousia genus are herbs or sub-shrubs and part of the Celastraceae family, although they may still be listed under Stackhousiaceae by some authorities. Stackhousia monogyna is a highly variable and widely distributed species, being found in WA, SA, Victoria, Tasmania, NSW and Qld. With such a wide distribution variations are to be expected, but with this plant, this trait is exhibited even within the Esperance region.

Growing to 60 cm (2’) in height, it can be spreading or rigidly upright; the flower spikes can be pure white to creamy yellow and the individual flowers tightly packed or openly spaced around the stem, or on one side. Foliage can be deep green to pale blue, be hairy or glabrous and arranged either near the base or along the stems, plus sparsely spaced or densely packed together. So it is not surprising that thoughts of finding another Stackhousia species are not uncommon, but currently Stackhousia monogyna is the only species in the Esperance region with creamy white flowers, although at some stage this complex is likely to be reviewed.

Stackhousia monogyna is not very particular about soil type, providing it remains moist, but not waterlogged around its flowering time. However inland, it is more commonly found around granite outcrops where water run-off provides additional moisture. In dry zones (often sandy soils) during summer this species behaves as an annual, but if less severe, as a perennial, although the stem and leaves may die back to re-shoot from the roots, or stem base the following year.

Plants in this genus can usually be found in scattered small colonies, but after bushfires or soil disturbance, can regenerate to temporally dominate the habitat, but within a few seasons will be pushed out by longer living species. They produce flowers over several weeks and are recorded in bloom from June to December, but this would depend on habitat type and local rainfall, although locally between August to October is usually when they are at their best.