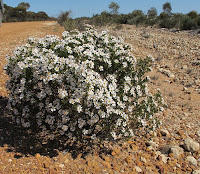 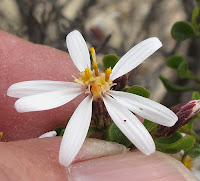 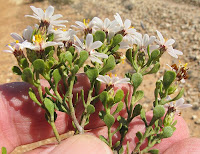 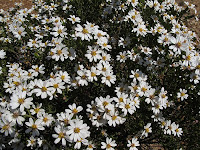 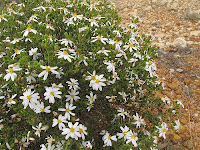 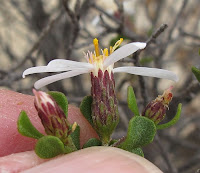 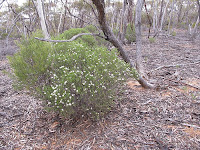 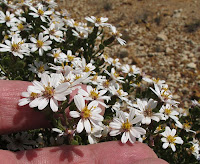 
Olearia muelleri is one of the many daisy bushes in the Asteraceae family and is known by a variety of common names, including Mueller's Daisy Bush and the Dusky Daisy-bush. This reflects the shrubs wide distribution across Australia, especially in the dry mallee country of WA. SA. NT. Victoria and NSW. In WA it is very common in the Goldfields region and across the Nullarbor. Around Esperance it is restricted to the inland mallee, where it is commonly found growing in various loams over limestone.

The Goldfields Daisy is a very hardy species, being able to tolerate very hot and dry conditions. As an instance, when the mallee has not been burnt for a considerable period, most of the underlying plants die-off as the taller eucalypts dominate the light and moisture availability. In this very dry environment, only a few very tough plants manage to survive and one of these is Olearia muelleri, although the foliage and flowers tend to be more sparse than if growing in an open situation. This ability for some plants to survive regardless of environmental conditions is important as the seed of most Asteraceae is short-lived and needs to be constantly refreshed

After bushfires these plants revitalise and their numbers increase, although they rarely dominate. In these conditions they commonly grow into compact round shrubs to 60 cm (2’) in height, although older plants under tall vegetation can reach 1.5 metres (5’), but this is unusual and the vast majority are much shorter. The foliage is flat, stiff and slightly viscid (sticky), which as an aid for survival in low rainfall zones, reduces leaf moisture loss.

The flowers are over 2 cm (to 1”) diameter, a vivid white with a yellow centre, although blue\purple colours are also recorded, but I have not encountered them. Flowers are produced anytime from August to January, but in the fickle and low rainfall areas these plants grow, local weather conditions will play a large part in the timing. Locally August to October would be the most reliable, with scattered flowers after storms at other times.