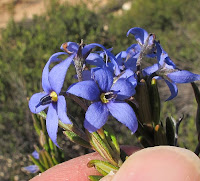 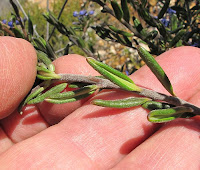 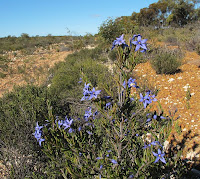 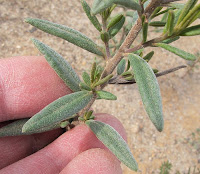 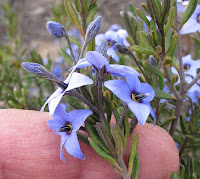 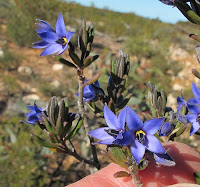 These attractive blue flowered shrubs belong to the Boraginaceae family and are widely distributed in Western Australia. Halgania lavandulacea mainly occurs from the NW of Esperance to Ravensthorpe, then both converging NW to Morawa, with a few outlying records from the Israelite Bay region and between Norseman and Kalgoorlie. It is not common around Esperance, with scattered small colonies in mallee regions from south of Mt Ridley to the southwest of Peak Charles (100 NW of Esperance), after which it becomes increasingly more common.

Most of my sightings have been on the edge of burnt areas in sandy loams and/or gravel over limestone. Shrubs have been to a metre (3’) in height and quite bushy. The blue flowers can usually be found at most times of the year, especially after summer storms, but the main period is late winter and through spring. The foliage is soft and not sticky, unlike the viscid H. andromedifolia (listed in the right-hand column), although these species have in the past been linked together. Besides not having sticky foliage, the calyx lobes of Halgania lavandulacea are of equal size (H. andromedifolia are unequal), plus most H. lavandulacea flowers are arranged singularly in the upper leaf axils, whilst most H. andromedifolia flower stalks (pedicels) are branched.

Posted by William Archer at 7:53 PM