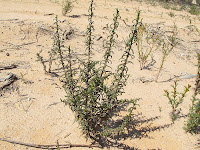 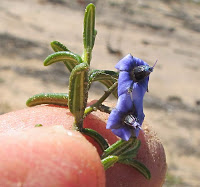 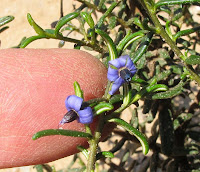 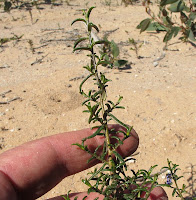 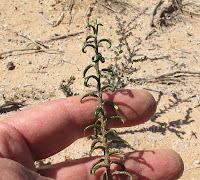 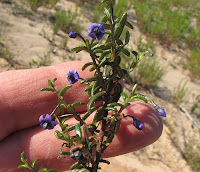 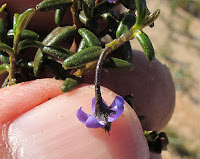 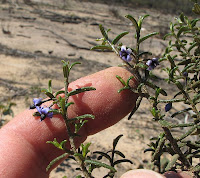 Halgania sp. Peak Eleanora – Boraginaceae
The above is a small rare Blue Bush species that is only known from a handful of collections in the Peak Eleanora region, which is 8.5 km (5 miles) south of Peak Charles and 120 km (75 miles) NW of Esperance. The above were photographed 15 km (9 miles) south of Peak Eleanora, growing in a slight hollow after a fire, and a sandy/clay loam over limestone.
Halgania sp. Peak Eleanora has a Priority Two conservation code, which basically means it is only known from a few collections and is currently not under any immediate threat. The single colony I happened upon had around a dozen plants and was very localised. The plants were of various sizes to 60 cm (2’) in height and the foliage was a very dark green and quite viscid (sticky), leaves were strongly recurved, some to 180 degrees. The partly hidden flowers were small, deep blue and semi-pendant.
Flowering time is not recorded, but from my observations over two seasons, they were in flower from early September to mid October, so reasonably safe to predict that in a normal year, they would at least span from August to November.

Update September 2012
Around 185 km (115 miles) due east of Peak Eleanora and near a large rocky outcrop, this species occurs in their thousands.  Plus around 5 km SW of that colony, there is another where this species would be in their millions.  Both colonies were growing in a heavy sandy loam (possibly overlying limestone) in a mallee eucalypt woodland that had been burnt 3-4 years earlier.  The habitat was noticeably flat and in a non-flooding low lying area.   There is no development in this region and similar habitat is reasonable common, therefore this species would not be considered rare or endangered.