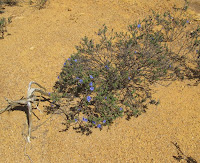 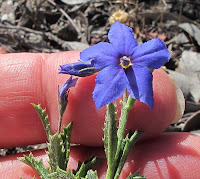 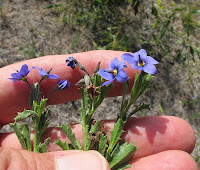 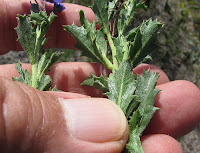 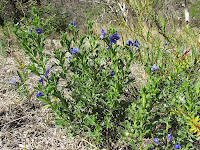 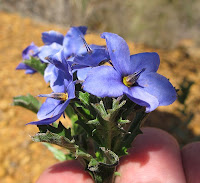 
This Halgania species is either a low spreading shrub, or a procumbent one and is widespread on a variety of non-calcareous soils in the drier regions from Israelite Bay to Kalbarri, with most collections away from the coast, but still within the wheatbelt zone. Currently there is confusion regarding the classification of this species, as not so long ago it was split into two varieties (var. anagalloides and var. preissiana), but these were discarded to lump them all into Halgania anagalloides. However, a new variety (var. Southern) has now been generated, but is not currently recognised, so currently all these plants are still officially grouped into Halgania anagalloides, but there is very likely to be another split somewhere down the line.

Plants contained within Halgania anagalloides, have toothed leaves of which they and the stems are covered in appressed stout white hairs, but no glandular ones (if plants have silky or glandular hairs, they belong to a different species). After a bushfire these plants usually respond very well and their number can increase considerably, but after a few years most are overgrown by larger bushy shrubs. Therefore in the long term, survivors tend to be restricted to natural openings, or in the dappled sunlight under mallee eucalypts that dominate the moisture, so making it too dry for large shrubs. Flowers can usually be found anytime during the warmer part of the year, particularly after good rainfall, although they seldom flower during the colder winter months.

Halgania is part of the Boraginaceae family.