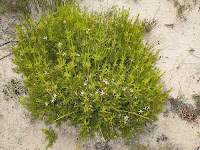 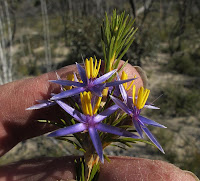 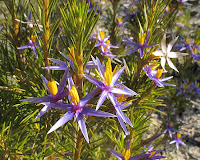 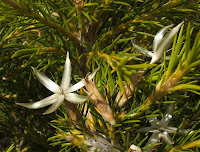 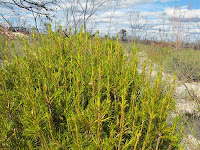 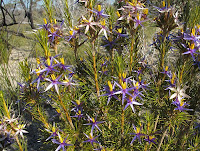 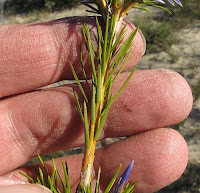 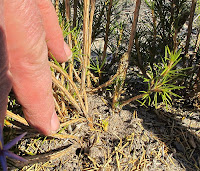 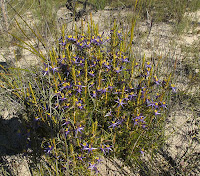 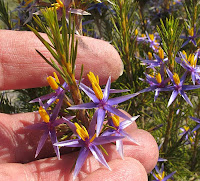 Calectasia is a very unusual plant genus in an even more unusual Dasypogonaceae family (sometimes included in Xanthorrhoeaceae). These include such ornamental oddities as Kingia australis and Dasypogon hookeri that produce sheathing leaf bases that form tree-like trunks to several metres/yards in height, then topped off with drumstick like flowering stems. These plants are also known by the common names of Pineapple Bush, Black Gin and more recently Bullanock (aboriginal name for Kingia). However none of these occur in the Esperance region apart from a couple of Tinsel Lily species, but these also have the sheathing leaf bases that provide branches with strength and structure.

There are ten WA species of Calectasia, plus an undescribed one, but most of these are from the SW of WA, or along the west coast, with only two in the Esperance region and one of those (C. gracilis) known from a single collection. Calectasia grandiflora is seldom encountered but can occur in large localised colonies; they range mostly from the Perth region to around 100 km (60 miles) east of Esperance. The colony shown above is likely to be a range extension, as it is in a mallee region 125 km (80 miles) NE of Esperance, whilst other records are near coastal.

The Tinsel Lilies above were quite common and well-established, growing on an extensive rise of deep sandy soil that was surrounded by the more typical mallee of fine sand/clay loam over limestone, and although similar sandy rises were nearby, no Calectasia plants were seen on them.

Calectasia grandiflora has 3 variants that are to be divided into 3 subspecies, but have not as yet been published. Only one of these occurs in the Esperance region and this is currently referred to as Calectasia grandiflora subsp. Wheatbelt, which as the name suggests is largely confined to the wheatbelt region (east of Perth to Southern Cross and Albany, then to the east of Esperance). This wheatbelt variant has a compact upright growth with large (over 3 cm or 11/4” diameter) purple/blue flowers, which later fade to cream. It has been suggested that Calectasia grandiflora be called the Large-flowered Tinsel Lily, to avoid confusion with another species (C. cyanea) that is also known as the Blue Tinsel Lily.

The foliage of the above is a pale green over the winter/spring flowering period, but develops a distinctive yellow/green coloration when conditions began to dry. Flowering is recorded from June to October, but exact timing would depend on local weather conditions. Plants above were photographed during the months of August and December.

Posted by William Archer at 8:53 PM