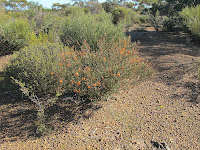 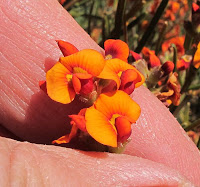 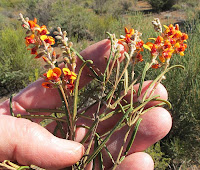 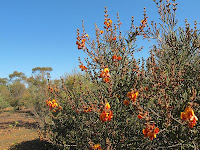 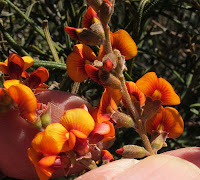 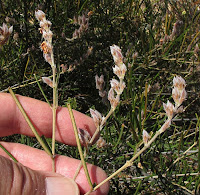 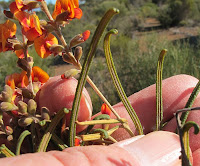 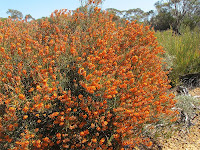 Many Gastrolobium spp. are highly toxic to stock and were responsible for heavy losses in the early days of settlement. There is a group of very similar plants in the Gastrolobium parviflorum complex (also known as Box Poisons) that are reasonably common in the Esperance region, the ones so far detailed are G. discolor and G. musaceum. These are shrubs commonly around a metre/yard in height with linear foliage and terminal clusters of bright orange/red and yellow flowers.

Gastrolobium melanocarpum is restricted to the North and NW of Esperance, then further NW to Southern Cross and South to the Fitzgerald River National Park (SW of Ravensthorpe). Around Esperance it is mostly encountered on gravel soils, which may or may not have a covering of a non-calcareous sandy loam. Although it is recorded growing to 1.8 metres (6’) in height, it is usually around half this height, unless the area is heavily overgrown, thereby forcing to plant to grow taller to seek sunlight.

This species is probably the easiest to recognise as it has distinctive foliage, which is narrow (between 1-2 mm or 1/10” wide) and the edges are tightly revolute, revealing only the silky midrib on the underside. The upper surface is without persistent hairs and openly reticulated. The top of the leaves are commonly recurved, plus importantly are opposite (not in whorls of three). The flowers are usually in clusters of twenty or more and although prolific in full bloom, are smaller than the others, being slightly less than 1 cm (3/8”) diameter.

The species name of Gastrolobium melanocarpum refers to the pods that often turn black once mature. Flowering is between August to October, with September usually the most spectacular period.