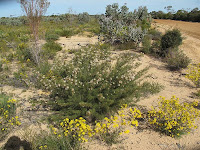 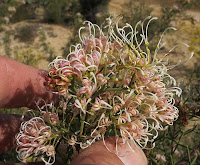 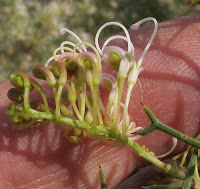 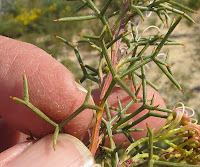 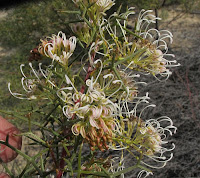 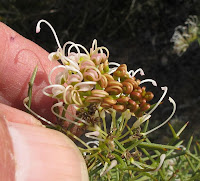 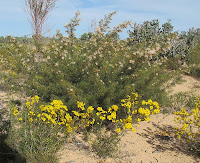 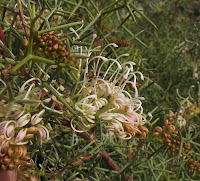 
Grevillea teretifolia is an inland species occurring to the NW of Esperance and spreading north to Kalgoorlie, then west to the Geraldton region and down to the Fitzgerald River National Park (SW of Ravensthorpe). It favours sandy loams over gravel, where it often forms compact colonies in suitable habitat. The closest colony to Esperance that I know is around 110 km (70 miles) northwest of town.

It is a handsome shrub to 2 metres (over 6’) in height, although more commonly half of that size. The foliage is divided, rounded with pronounced ribs and the tips ending in sharp points, whilst the clusters of pink or white flowers dominate the spreading branches.

The flowering period is recorded from June to November, but would probably be influenced by local weather conditions as to when they begin and end. Insects are strongly attracted to the flowers and a variety of colourful beetles, wasps, flies, butterflies, etc, can usually be found feeding from them, making these plants excellent places to check out local invertebrates.

Posted by William Archer at 2:55 PM