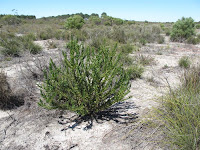 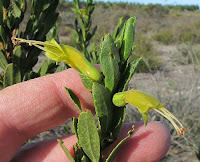 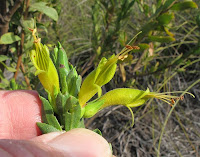 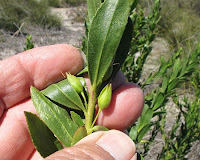 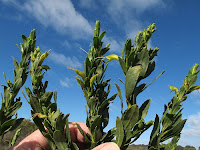 
The above is yet another variation of the Eremophila glabra species, except this subspecies is known only from a small area 40 odd km (25 miles) NNE of Esperance. I know it only from a single shrub 1.5 metres (5’) in height, which is growing in sandy loam (probably over clay) at the base of a drainage system a few hundred metres/yards from a swamp. Owing to the extensive non-calcareous sandy soils of the area, it is unlikely to flood, but water probably seeps from it into surrounding heathland, although going on nearby vegetation, the drainage area would be slightly saline.

Although Eremophila glabra would be one of the most widely distributed Australian Eremophila species, it is surprisingly absent from the Esperance district, with very few records of any subspecies. So having this green/yellow flowered variety on our doorstep is most unusual. The species is easily separated from a similar looking species E. decipiens by the pedicel (flower stalk), which is short and straight, whereas with E. decipiens it is much longer and curved into an S.

Eremophila glabra subsp. Scaddan has a Priority One Conservation Code, which means it is only known from a few (less than 5) small populations, which are under threat and in urgent need of further survey. The greenish flowers are probably pollinated by honeyeating birds as are the other E. glabra subspecies. It would appear to flower from July to early November as observed, although extreme local weather conditions may extend or reduce these times slightly.